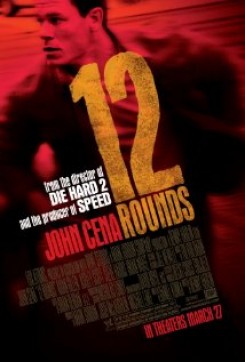 Detective Danny Fisher discovers his girlfriend has been kidnapped by a ex-con tied to Fisher's past, and he'll have to successfully complete 12 challenges in order to secure her safe release.

Danny's (John Cena) pet pug sits on a couch with a bone. It then jumps off the couch and follows Danny into the front yard and onto the sidewalk. For this mild action, trainers placed the dog on its mark and then stood nearby, using hand signals to cue the dog to stay, bark or walk. Suddenly, a car across the street explodes, followed by Danny's house. Danny then hands his dog over to a neighbor. The dog was not actually on the set for the two explosions. While the car and house burned in the aftermath of the explosions, the dog was kept a safe distance from the controlled flames and the smoke effects. The dog and the actors were well-rehearsed for the handing over of the dog, and trainers stood nearby. The gun Danny carried was a prop gun. Streets were closed off to traffic. Cast and crew members were introduced to the dog and instructed on its proper handling before filming.

As Danny is chasing a bad guy, he runs through a yard where a bulldog suddenly emerges and chases him to a fence. When Danny jumps over the fence, his gun falls to the ground, and the dog (who is still on the other side of the fence) barks and growls at him. The dog starts chewing on the gun, barking at Danny when he tries to retrieve it through the fence. This scene was filmed in separate shots. Trainers led the dog to the set on a leash, placed it on its mark within a fenced area and then stood nearby. A trainer called the dog to run toward the fence and rewarded it with a stuffed toy. The dog was allowed to play with the toy and get excited before resuming filming. While the crew filmed a close-up of a stuntman's legs climbing the fence, a trainer stood on the other side of the fence and shook the toy to get the dog excited and barking. Then continuing this play action, the dog was cued to "get" the rubber gun prop.

Due to late notification and limited resources, American Humane did not monitor some of the dog action.