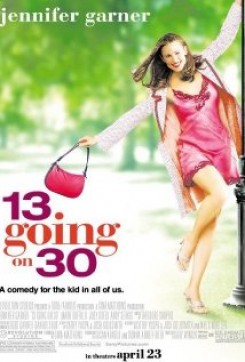 Gawky Jenna Rink is a typical preteen girl who wants more than anything to grow up—and fast. On the eve of her 13th birthday, she fervently wishes to bypass her angst-ridden adolescence and zoom forward to become "30, Flirty and Fabulous." When she wakes up the next morning, Jenna's dream has come true and she's now a successful magazine editor with great clothes and a hockey star boyfriend. But there is one catch; she's still 13 and trapped inside her almost 30-year-old body.

This film contains mild animal action involving dogs and a leopard shark in a home aquarium.

While strolling through Central Park eating an ice cream cone, Jenna (Garner) encounters a dog walker leading six canines of various breeds that she crouches down to greet. For this scene, a professional obedience trainer played the role of the dog walker. The dogs were instructed to go for the ice cream – not an unpleasant task for any canine – and the actress was introduced to the six dogs well in advance of the shoot so that all parties would feel at ease working together.

While fending off her boyfriend Alex's insistent advances, a large 50-gallon fish tank housing a small shark appears in the background. Mabel, the leopard shark used for this film, came on loan from the Long Beach Aquarium and the fish tank was specially made for this shot. A shark expert brought Mabel to the set and continually monitored the water temperature and aeration in the aquarium for the fish's optimum health.

During Matt's (Ruffalo) photo shoot with a group of football players, one of the team members holds an English bulldog who appears as the team mascot. The production originally intended to show only a photograph of this dog, named Da Vinci, but was so taken with his rakish good looks that they wrote a part for him into the movie. One trainer handled the dog for this scene and kept Da Vinci in an air-conditioned vehicle between takes because filming took place on a warm summer day.

During the Class of 2004 shoot, an elegant older woman holds a Pomeranian. Due to the actress' advanced age, the trainer stepped in to hold this canine beauty, named Chachki, whenever the woman's arms tired.