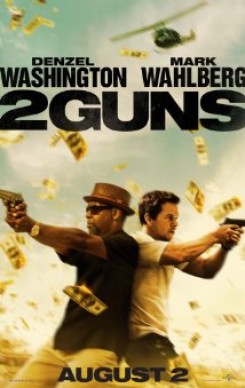 A DEA agent and Naval officer team up to take down a mob boss.

This action packed adventure features some unique animal sequences that the American Humane Association was on set monitoring the whole time.

In the scene where we see horseback riders, they were stunt riders or experienced actors who were skilled at riding, mounting and dismounting.

In the scenes where the bad guy unleashes his pet bull from the gate and it runs towards the actors who are hanging upside down, smashing its horns against the railing, they shot this scene split screen so they shot all the coverage with the stunt men and real actors without the live bull present. Then they cleared out the pen and filmed the bull’s coverage. Wranglers used a fake dummy with a rope attached to it to get the bull out of his pen and to charge at the railing. The bull did not hit the railing; sound effects were added in post-production to make him look as if he had.

In the scene where the Mexican gangsters shoot off the heads of a line of chickens buried in the sand, the chickens were placed in a specially built box that was constructed by the art director. The box was approved by the AHA for its comfort and temperature. The box also allows for the chickens heads to come up from the sand. So they’re buried in the sand, but their bodies’ are in the boxes. Chickens were placed in this box with food placed outside the hole in the box allowing them to stick their heads out to eat. After the food was gone the chickens would retract their heads back inside the cage. When their heads retract special effects will use this movement to make it appear as if their heads were blown off. Wranglers were also off-camera monitoring the chickens grazing in the coop.

In the scene where we see a coyote roaming around the desert, the trainers placed the coyote on its mark and used a buzzer off camera to cue him to a mark that had food. Coyote was retrieved after filming this scene.

In the scene where the villain goes to a vet to get stitched up and they’re surrounded with dogs barking in individual cages, they actually filmed this scene in a veterinarian’s office with existing kennels/cages that were safe and appropriate for use. During filming trainers placed water bowls in each of the cages. In the same scene there’s an iguana in an aquarium in the background which was fed pellets between takes.

The dead deer tied to the front of the truck was a fake. Production provided documentation for the fake dead deer.

In the scene where the cattle stampede out of their corral and run near actors who are engaged in a gunfight, wranglers built a pipe corral to drive the cattle past the camera frames from point A to point B, near the actor who has been shot. The actor is separated from the cattle however. They’re not in the same space.

The scene continues with someone firing a gun outside of a helicopter at our heroes while the cattle and horses stood in the background. They were never close enough to the gunfire or helicopter to be spooked.

In the scene where the helicopter crashes near the bull, the helicopter was drawn up into the air on a slide cable attached to a crane. This helicopter had no blades or rotors on the ship. They will be added by CGI. On action, the helicopter was released and it crashed to the ground breaking into hundreds of pieces. (No animals were anywhere near the ship.) A green screen was then built and placed in front of the cattle pen and placed on a mark per the director. After the pen was built and the green screen was in place the bull was removed from the cattle trailer and released into the pen. On action the wrangler dangled an alfalfa cake in front of the bull on a lunging whip line to get the bull to look up as if he was looking at the helicopter coming in prior to the crash. The wrangler then called the bull to look at camera the bull did, Cody then called the bull out of frame and was put back into the trailer.