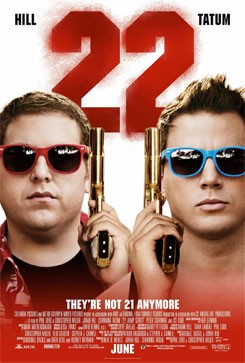 Schmidt and Jenko go back undercover when they infiltrate a college for a mysterious drug dealer.

In the scene where our heroes get into a fight with the bad guys in the back of a moving truck and birds fly from their crates and lizards crawl around the ground, trainers hung bird netting at the open rear of the semitrailer to insure safety. Flying Birds (cockatoos) were a tether. The tethers were held by two trainers during filming so that there was enough slack to ensure safe landing on the crates. All remaining birds were non-flying birds with wings clipped to prevent escape. All gunfire was filmed separately and no animals were on stage at the time of the gunfire. The motion-rig was a semi-trailer equipped by SFX department with special airbags to rock the trailer side-to-side and back-and forth. An acceptable level of movement was determined by the AHA rep and SFX department. A trainer also placed an iguana on a crate.

In the scene where two guys play with lobsters, with one guy picking up a lobster from the ground, then placing it in a pot, the actors were shown how to hold and handle the lobsters by the trainer prior to filming. At cut, all lobsters were returned to a safe place. The pot was not filled with water, it was empty.

In the scene where a donkey walks through a crowd during Spring Break, the donkey was brought to the beach several days prior to filming to let him become accustomed to the waves, noises and surroundings. The extras were prepped on where to stand and not scare the donkey.

Due to limited resources, American Humane Association did not monitor any of the action involving the octopus and the pigs.