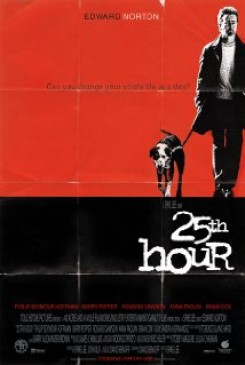 The 25th Hour depicts the last day of freedom for Monty before he begins serving a seven-year jail term for drug dealing. Prowling through the city until dawn with his two close male friends and his girlfriend, he is forced to re-examine his life and how he got himself into his predicament.

In the opening sequence, Monty finds an injured dog lying on the ground. The dog looks at him and growls, revealing cigarette burns on the dog. Monty gets a blanket and wraps up the bloody dog and puts it in the trunk of his car. The dog was placed on his mark. The dog was verbally cued to growl and snarl by the trainer. Before filming began, the trainer applied non-toxic make up to the dog, so it appeared as if the dog had burns and blood on it.

The next time we see this dog, he has recovered and is sitting by Monty who is seated on a bench. The dog has been named Doyle and it is obvious that Monty has adopted the dog as his companion. Doyle and Monty walk side by side as Monty holds on to Doyle's leash. As they walk through Central Park and down the sidewalks of the city, there are some other dogs on leashes being walked in the background. At one point, as Doyle and Monty are walking along together, a young girl stops and pets the dog. A trainer put the dog on its mark and stood off camera using hand signals to get the dog to achieve the action. The dog was introduced to the actors before filming so everyone including the dog would be comfortable when "action" was called. When Monty and Doyle enter Jake's place, Jake pets the dog who is sitting by Monty's side. A trainer put the dog on its mark and stood off camera. The dog was happy to sit by the actor who continued to pet the dog. In several other scenes the trainer merely handed the leash to the actor who walked Doyle through the scenes.

The Dog Protects and Serves:

In a more active mode, Doyle runs to the door barking when the DEA agents arrive. As the agents enter the house, Doyle is sitting on a blanket barking at them. Monty calls to the dog and Doyle obediently comes and sits next to him. Later when his friends enter the house, Monty holds Doyle by the collar. Jake sits on the couch and Doyle, who had been previously acquainted with the character, walks up to him so he can be petted.

Monty walks Doyle with his friends, Jake and Frank. As they pass a lady with a dog on a leash, the men stop and talk as the dog sits by Monty. The trainer's handed the actor's the dogs' leashes right before filming began and retrieved the dogs when filming was over. All of the dogs were well socialized with each other.

Monty gives Jake the dog's leash and he sits on a bench and pets the dog. The dog is tied to the bench in the background barking and growling when Frank hits Monty. As Frank stops hitting Monty, the dog is still seen in the background barking, but without sound. A trainer stood behind the cameraman and used hand signals to get the dog to react. A bungi cord was in between the leash and the bench to take any strain off the dog's neck.