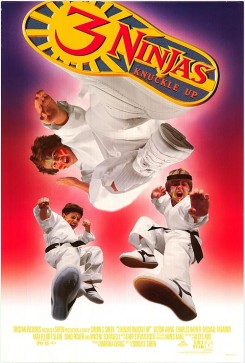 Once again, our three young Ninjas, Rocky, Colt and Tom, become heroes. Thinking that they are going to have another boring summer vacation at Grandpa's house, Rocky, Colt and Tom are quite surprised when they arrive and realize that there is a full force protest going on by the local Indians against a seedy business man by the name of Jack Harding. It seems that Harding has been dumping things other than garbage in the nearby landfill and the Indians were becoming very ill, ... even dying. The boys befriend Jo, a young Indian girl, and help rescue her father, who has been kidnapped by some of Harding's men. Jo's father came across a computer disc which confirmed that Harding was dumping toxic waste in the landfill. After the successful escape plan works, Harding realizes he is doomed if the disc becomes public, so he has Jo kidnapped, knowing her father would not reveal his evidence if it would endanger his daughter's life.

Animal action is minimal and mild. In one scene Tom is seen feeding a Rottweiler a half of a sandwich. Ponies are also seen grazing in the background of one scene and a few pigs are seen in a pig sty.