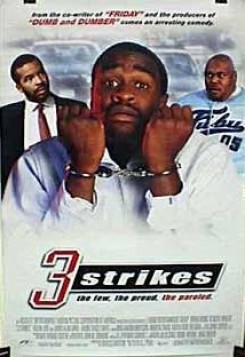 3 STRIKES is a comedy about a bungling young delinquent, Rob, who has had two felony convictions for non-violent crimes and fears the new California Three Strikes Law will find him back in jail. The law states that if convicted of a third felony the perpetrator will receive twenty-five years to life. As Rob prepares to leave jail, he has a awful premonition that he may be back even though he is determined to never find himself among the scary convicts again. He is free for ten minutes before he is again a wanted man.

Animal Action consists of several dogs. Some appear as neighborhood guard pets and one German Shephard plays a police dog.

One of Rob's friends feeds three pit bulls in the back yard as he chats with Rob on the phone. Although we only see the actor from the waist up he gives the impression that he has kicked one of the dogs. Sound effects of a yelp added in post production help enhance the effect. No dog was actually kicked.

After Rob finds himself a wanted criminal, he is chased by a police dog. The German Shephard chases him down a residential street, into an alley and over a fence. Luckily, Rob clears the fence and lands inches from a swimming pool. The dog however, sails over the fence and directly into the water.

This scene was shot in cuts. For the initial leap the dog ran up a ramp, jumped over the fence and landed on a platform where his trainer was waiting. On the pool-side, a second platform was built eighteen inches from the ground and one foot from the water. Two trainers lifted the dog onto the platform and gently tossed it into the water. The dog had been prepped in pre-production and was comfortable diving into the pool Later the dog is seen being walked on a leash by an officer who is patrolling a media event.

During part of the chase, a neighborhood Rottweiler that is guarding his territory barks at Rob but then bites the arm of the police officer who is in hot pursuit. A stuntman was portraying the officer and the dog was highly trained in Personal Protection and responded to the trainer's verbal cues.