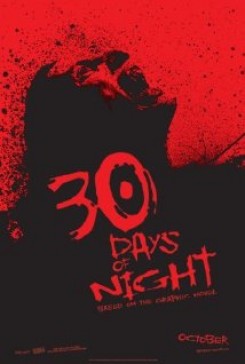 Every winter, the remote Alaskan town of Barrow experiences 30 days of darkness. This winter, fear and terror befall this tiny community as it tries to survive the brutal slayings of a group of vampires who have arrived for a month of feeding — on human flesh.

Dogs are seen chained to boxes in a fenced yard. At one point, they lunge to the end of their chains and bark at passersby. This scene was filmed on a secured indoor set covered in fake, nontoxic snow. Trainers cued the dogs to move forward and bark, and one dog was cued to snarl. The dogs were rewarded with praise and food. The area was thoroughly inspected before filming began, and only necessary crew members were allowed on set. Cast and crew were instructed on the handling of the dogs before filming began and were told to keep the noise level down. The dogs were well-rehearsed for the action and responded happily to the trainers' commands.

One of the dogs is seen close up, bloody and mangled. This scene was filmed in separate shots and edited together in post-production. It was filmed on the same indoor set using the same fake snow. The blood was made of a nontoxic glycerin and food coloring mixture and was cleaned off the dog immediately after filming. To give the appearance of the dog's legs twitching, a trainer carefully picked up the dog's upper body, letting its legs naturally dangle and move. For the close up of the dog's bloody face, a fake dog was used.

The polar bear along the town's main street was carved from polystyrene. Production provided documentation that the dead animals and trophy mounts were fake.