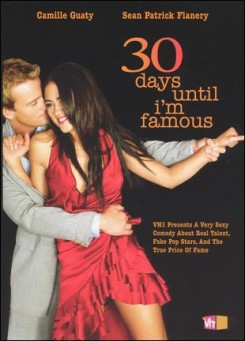 Frustrated at getting passed over for a promotion, Cole (Flanery), a music scout for Everest Music Management, bets his boss he can transform any girl into a winning performer in just four weeks. If he succeeds, the position will be his; if not, Cole loses his job. Moments later, he spies Maggie (Guaty), a courier making a delivery to the office, and offers her $40,000 to become his protégé and beat fellow competitor Daisy Fresh. Though driven to win the competition, the industry playboy never expected to fall in love with the Latin sensation he creates.

This film contains very mild action involving a dog and a fish tank.

Frida, a grey and white terrier mix, spends much of the movie by Maggie's side. This faithful pooch is often seen walking from A to B or sitting in the shot. To achieve this type of action, one trainer would release Frida while another trainer off camera called to her or used a whistle to get the dog to come. Any time this type of action took place outdoors, the streets were blocked off by the police. For other scenes, the trainer would place the dog on mark in a sit/stay position, rewarding Frida with food treats upon completing the action.

A large aquarium sits in the living room of Cole's beautiful beach side mansion. Andrew Lee of Aquatrends supplied the tank and fish for this production and oversaw the action. Initially there was just one fish in the tank, a powder blue tang, and the shells that Maggie drops in were provided by Lee and prepared for aquarium use. The scene where Maggie accidentally flings her high-heeled shoe into the tank was done in two shots. The shoe that actually lands inside had been cleaned and prepared for the tank so as to cause no harm to the fish, and Lee confirmed that the sinking shoe could have never hit the fish because they swim very fast. In a later scene, Cole surprises Maggie and shows her that the aquarium is now filled with colorful exotic fish. Again, the production rented these fish and returned them to Aquatrends when filming ended.