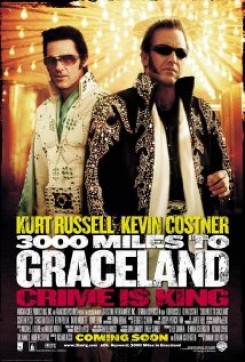 Sin City gets a dose of crime when a group of ex-convicts pull a casino heist during an Elvis convention.

A boy picks up a scorpion by its tail and carefully places it inside a jar with a cloth inside of it. Later, a man named Murphy puts his hand inside of a duffel bag and is bitten by a scorpion hiding inside. The scorpion is on his hand very briefly, and the actor was not actually bitten.

In a particularly graphic scene, a coyote is hit by a car. The force throws it onto the car, resulting in a gruesome display of blood, guts, and fur on the windshield. A representative from AHA was on set during the filming of this scene and ensured that no animal was harmed. To achieve the grizzly effect, a trainer put a coyote on its mark in the street and stood off-camera with another trainer. The car in the scene was parked in front of the coyote and then proceeded to back up very slowly, away from the animal. Later, the car's action was reversed and sped up in post production to make it appear that the car was actually going forward. A fake coyote smeared with stage blood and guts was used for the windshield shot.

In one scene, a dog stands in the street wearing a doggie sweater. It sits. Later, a dog frolics in the background as two characters enter a car.

AHA partially monitored the animals on this film and after a careful screening and review of the animal action, is rating the film Believed Acceptable.