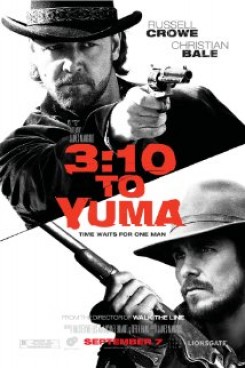 After a drought damages his land, a rancher (Christian Bale) struggling to provide for his family takes a job escorting outlaw Ben Wade (Russell Crowe) to the 3:10 train to Yuma, so he can have his day in court. But between the conniving tricks of Wade and the antics of his murdering, thieving posse, delivering this outlaw will be a challenge.

American Humane deeply regrets the unfortunate death of a horse on the set of 3:10 to Yuma. With the full cooperation of the production company and Lionsgate, American Humane conducted an independent investigation into this tragedy and found that the death was an accident and that appropriate guidelines and procedures were followed. In this incident, neither the filmmakers nor the animal trainers failed to comply with American Humane's Guidelines for the Safe Use of Animals in Filmed Media.

The accident occurred during a scene in which horses approached the camera to create the point of view of the oncoming horses running toward the viewing audience. For the scene, 11 horses were ridden at a lope down a sandy road toward a camera car that was in motion. During this run, the horses were being ridden at half speed for a rehearsal take that was being filmed. Several rehearsals had previously been held without incident. The road had been checked for rocks and holes before filming began. Under the guidance of their riders, the horses were rehearsed to split into two groups as they approached the camera car and pass it, with five horses riding past one side and six past the other. But during filming, the last rider and horse allegedly veered in the wrong direction, colliding with the camera car. The horse suffered severe chest lacerations, shoulder dislocation and multiple fractures, including an extensively broken left front leg. A veterinarian was called to the scene and determined that euthanasia was the best option, considering the extent of the injuries and the irreparable harm to the horse. It was determined that the accident might have been caused by the horse inherently wanting to follow his "riding partner" (another horse that was occasionally used with this one in the same four-horse team). Both American Humane and the filmmakers are devastated by this tragic accident that could not have been predicted.

The film is eligible for the American Humane disclaimer "American Humane monitored the animal action," although the film will not carry this disclaimer, since a pre-release screening was unavailable prior to the composition of its credits.

Throughout the film, several wranglers on foot and horseback were nearby as a safety precaution. The grounds were thoroughly inspected for debris and hazards before filming began. Anytime actors appear to shoot at or near horses, the action was pantomimed, and no actual bullets were used. For shots in which actors on horseback shot up in the air or away from horses, "quarter load" and "powder" blanks were used. The particular animals used in this film had been around the sound of gunfire and were used to it. The animals were also used to being around people. Whenever horses were tied to hitching rails or posts, they were secured by trainers. When horses were ridden in the background, including when they ran on rugged terrain and up hills, it was mild action that the horses were used to and comfortable with. Safety meetings were held before filming to instruct cast and crew members on the proper handling of the animals and on gun safety and actors were given riding lessons before filming began. Cast and crew members were told to keep the noise level down. Only necessary crew members were allowed on set. When teams of horses pulled wagons or coaches, the vehicles were lightweight, and wranglers doubled as riders or actors whenever possible. Teams of horses were well-rehearsed and familiar with each other. Horse bits were warmed up before being put into horses' mouths. When roosters, hens and chickens are seen in the background, they were tethered with a lightweight monofilament and were used to being tethered. Feed was placed on the ground to keep them in position.

For the gun battle scene in which a horse and rider explode into a fireball, the explosion and fire were created with computer generated imagery (CGI). Whenever men ride horses while carrying torches, the torch fire was also CGI. For any scenes involving actual fire, the fire was controlled by an off-screen crew member, and the horses were kept a safe distance from it.

Dan Evans' (Christian Bale) barn starts on fire, and he and his son run in to save the animals. For this, the two actors ran into the barn and into the horses' stalls, which were not near the fire. The controlled fire was contained in empty stalls and at a safe distance from the animals. The two actors took the horses by lead ropes and walked them out of the barn, handing them to off-screen wranglers. Other off-screen wranglers opened the corral gates and moved through a herd of cattle, helping to corral them out. The explosion at the end of this scene was a combination of visual effects and a staged explosion, which was not triggered until the cattle were removed to a safe distance. After the cattle were herded out, they were positioned into a catch pen to keep them away from the fire. Before filming began, a safety meeting was held and the fire effects were tested.

Ben Wade (Russell Crowe) stares at a buzzard, which sits on a tree branch. For this, a trainer placed the bird on a branch, tethered it and gave it a treat. The tether was released when the camera started filming. The trainer used a whistle to call the buzzard, and it flew to the off-camera trainer to perch on his hand. The buzzard was equipped with a GPS unit as a precaution.

A dying cow is in the road, and Evans shoots it. No actual cow was used. The cow was a prop, with air hoses rigged inside of it to make it look like it was still breathing. Bale's shot was directed at nothing.

As a stagecoach and team of horses travel down a road surrounded by hills, a horseback rider herds some cattle down one of the hills and onto the road, cutting off the stagecoach team's path. This scene was filmed in a controlled environment surrounded by wranglers. Camera angles made it seem like the horses and cattle were closer to each other than they actually were. When the cattle were herded down the hill, the wranglers did not push them hard -- cattle only go as fast as they are pushed. The cattle were familiar with the terrain and could stop easily on their mark. A part of the scene in which the stagecoach horses run away and the wagon flips over was filmed in separate shots. The horses were called away before the wagon was flipped over by crew members.

The wheels of the wagon transporting Wade slip off a bridge, dangling into a shallow ravine, and the men try to move the wagon back onto solid ground. Before filming began, crew members positioned the wagon's back wheels so that they were dangling off the bridge. Wranglers then moved the horse team into position on solid ground. When the men pushed the wagon forward and onto solid ground, the horses were cued to also move forward. A wrangler was hidden inside the wagon for safety and stunt doubles served as riders for this scene.

After asking the man in the stagecoach where Wade is, Wade's posse starts the coach on fire. Kerosene was used to start the controlled fire at a safe distance from the horses; then the camera cut away. The horse teams were then moved far from the coach for the remainder of the fire scene.

Dan and the gang walk through a tunnel to get to a blasting camp, where Wade is being held. The dust and smoke were special effects and all the tools and corpses were props. Several stunt riders galloped about 25 yards through the tunnel opening. The horses were rehearsed at a trot and gradually worked up to speed.

A group of these mounted men exits the tunnel while another group appears to stay behind. The group who leaves turns their horses, fires a shotgun and throws a bundle of dynamite into the tunnel. The explosion was a visual effect made with an air mortar, cork debris, smoke, dust and wind. Horses were never less than 30 yards away from the explosion effect -- camera angles made them appear closer. The trainer and the American Humane Animal Safety Representative asked to see a demonstration of the explosion before bringing the animals in, to see how the dust and debris would behave.

In a brief scene, a monkey is sitting on a desk and scratching itself. For this scene, the monkey was placed on its mark on the desk, where it did whatever came naturally. The action was mild, and the entire scene was filmed very quickly.

Evans' son releases cattle from their pen, and the cattle trample Charlie. For this scene, dozens of cattle were gathered into their pen. Wranglers used the inside panels of the corral and acted like a human wall to keep the cattle together during filming. The wranglers drove the herd forward through the corral's alley using their arms, vocal noises and herding sticks. Feed was placed at the cattle's end mark to get them to stop. A special small fence was created to serve as an enclosure for Foster to hide in as the cattle pass so he appears to be trampled. This enclosure was high enough so the cattle would not be able to walk over it and narrow enough so they were able to easily pass by it. Wranglers drove the cattle back into their corral immediately after filming.

When Wade is finally on the 3:10 train, he whistles for his horse to join him. For this shot, a wrangler held the horse, named Ribbon, on his mark, which was ahead of the slowly moving train. Once the train passed the wrangler and Ribbon, the wrangler let him go while a second wrangler standing ahead and off to the side called the horse. Ribbon rode alongside the train and turned toward the second wrangler, out of frame. The horse was rehearsed to follow a path that was a safe distance from the train.

Production provided documentation that dead animals and animal pelts seen in the film were fake.