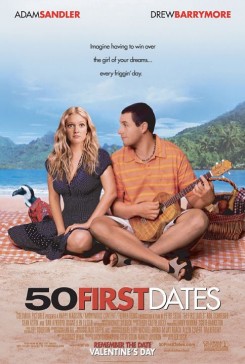 A romantic comedy set in Hawaii, 50 First Dates stars Adam Sandler as Henry Roth, a marine biologist who has perfected a love 'em and leave 'em routine with countless vacationing women. That is, until he meets and falls head over heels for Lucy Whitmore (Drew Barrymore), a gorgeous, talented artist suffering from short-term memory loss. Since she can never remember meeting him, Henry must commit to winning Lucy's heart over and over again with every new day.

Henry's job at the marine park puts him in constant contact with several graceful dolphins, a gregarious walrus named Jocko, and Willie, the playful penguin. These animals perform all manner of hilarious tricks one would expect to see in such an environment. The film also contains mild to moderate action involving some chickens pecking outside of the Whitmore home and the Houkilau Café, and a roving cow that causes Lucy's car accident.

All of the aquarium scenes took place at Six Flags Marine World in Vallejo, California, where regular park trainers coached the walruses, dolphins and penguins that appear in the film. The actors worked directly with the animals under the close supervision of these aquarium trainers as well as Animals of Distinction head trainer, Steve Berens.

In an early scene, Henry rushes to the aid of Jocko, a 1,200-pound walrus who languishes on the ground in his habitat and appears quite ill. Henry calmly strokes the walrus's face while Alexa (Lusia Strus) his androgynous assistant grabs some fish from a barrel to rouse the ailing animal. Henry moves to examine the walrus's abdomen, and on the count of three, the actor pushes down on Jocko's stomach, causing the walrus to let out a deafening belch and shower Alexa with a tsunami of vomit. It seems Henry has trained Jocko to hurl on cue, for the vivacious walrus next appears doing a victory dance as he high-fives his human accomplice.

As one would hope, Jocko's projectile vomit was computer generated. The walrus was trained to open his mouth on cue, and the production filmed a reverse shot of the odious substance cascading over Alexa. This scene took place in the walrus's compound at the marine park, and the barrel of fish seen here contained the animal's usual food.

For the scene in which Henry attends to Jocko's oral hygiene, two aquarium trainers verbally cued the walrus to open its mouth, and upon action, the actor brushed the animal's teeth as he held its mouth open. A trainer stood off camera nearby throughout the shot, and after about 30 seconds of brushing, he directed Jocko to head into the pool.

Henry later uses sonogram equipment to examine a sea lion and determine that she is pregnant. Berens confirmed that the production used a fake sonogram machine for this scene and that the animal was not actually pregnant.

In a night scene at Walrus Cove, Henry introduces Lucy to Jocko. The walrus offers up a flipper for Lucy to shake and nods his head vigorously to Lucy's questions about her relationship with Henry. To achieve this action, trainers stood off camera behind the actors and cued the walrus to "shake hands" as the actress approached and touched his flipper. Trainers similarly cued the animal to nod his head up and down when Lucy quizzed him.

With a brilliant display that includes waving, blowing kisses, burping, and playing peek-a-boo, Jocko exudes considerable charm when Henry visits to bid him farewell. During their poolside chat, an off-screen trainer cued the animal to "blow kisses" and the walrus touched a flipper to his nose. Henry then stands up and gives Jocko a kiss on the whiskers before walking out of frame. Again, the unseen trainer coached the walrus to shake his head "no" and cover his eyes before a close-up focuses on the animal doing a "head back" pose and burping. The animal received ample preparation with the actor for this scene, and many food rewards for a job well done.

In one of the film's final scenes, four female walruses –supposedly smitten with Jocko – kiss each other in a lineup. Trainers easily achieved this action while standing unseen on the deck of the exhibit and signaling for the animals to kiss each other and then jump in the tank.

The penguin star of this movie belongs to the marine park's bird show and is crate trained and handled often. After Jocko throws up on Alexa, Willie the penguin laughs heartily from the sidelines. For this sequence, trainers brought the bird over in a crate and released him to walk over to his mark. Willie looked around for a few moments until trainers called the penguin back over to his crate. As a safety precaution, crew members fenced off the walrus pool so that the animal could not escape into it, and the walrus was kept away from Willie.

When Willie sits on a table in Henry's office observing Ula's (Rob Schneider) rudimentary surgery, the actor feeds the penguin a tasty morsel of mackerel. Three trainers on set worked with four penguins for this scene. Trainers placed the penguin on the table and gave it verbal commands to stay or walk from A to B. The crew padded the sides of the table to eliminate any sharp edges, the area was air-conditioned, and trainers spritzed the birds' plumage often to retain moisture.

In a later scene, Henry bathes the penguin and then rewards him with a sundae. Though extremely realistic in appearance, props technicians actually concocted this delectable sundae out of mashed potatoes stuffed with the bird's favorite fish. When Willie later appears with whipped cream all over his head, production used real whipped topping and washed it off immediately after the shot, causing no harm to the animal.

Henry's sure that Lucy won't resist stopping to meet an adorable, Hawaiian shirted penguin standing in the middle of the road, but he gets more than he bargained for when the distracted woman actually runs right over the poor bird! To create this effect, the production first shot the actor with the penguin by a parked car on the side of the road. Henry sets Willie down and the penguin waddles to the middle of the road. Trainers then removed the real penguin from the scene and the car drove over a fake penguin standing in its place. These two shots were processed through in post production, with special effects smoke added in around the understandably miffed penguin. The production created the special non-constricting Hawaiian shirt Willie wears, and trainers worked with the animal to get him get comfortable wearing it. For additional safety, the rural road was closed to traffic during filming.

In various scenes at the aquarium, dolphins jump and dive in and out of their tank, nod and laugh at Henry's antics, or swim playfully with Henry's crazy best buddy, Ula. For this type of action, the production captured footage from the dolphins' show at Marine World, or filmed the animals doing the kinds of tricks they already love to do. The dolphin tank seen in Henry's office is actually a hi-definition monitor showing pre-recorded underwater images of swimming dolphins taken from a walk-through viewing area at the water park.

These animals were prepped exclusively by park trainers under a very strict protocol. The trainers made sure that the walruses and dolphins did not deviate significantly from their regular schedules and routines, and they closely monitored the number of hours the animals worked as well as their feeding program. For the animals' safety, all crew members had to disinfect their shoes in a foot bath before entering the walrus and dolphin habitats.

When Ula swims with the dolphins and emerges from the pool sans the seat of his pants, the actor really did interact with the animals in a special area of the park where the public can pay to swim with these fascinating mammals. Marine World calls this "touching experience" the Dolphin Discovery program, and participants don wetsuits, meet the dolphins and their trainers, and have the chance to touch the animals and have their picture taken. These dolphins felt exceptionally comfortable working with the general public as well as the zany actor.

The accident that triggers Lucy's short-term memory loss occurs while she's driving with her father Marlin (Blake Clark). Suddenly, they see a cow in the middle of the road and must swerve violently to avoid running into it. The car spins out of control and crashes into a tree off camera, and the cow is next seen trotting hurriedly away from the smoking vehicle. For this scene, handlers guided the cow to its mark in the road and the production shot one take of the car in the same frame, driving slowly up towards the cow. The cow seems to "react" to the crash by running to another cow buddy waiting with a trainer out of view. To create a smoldering effect, the car had a smoke mortar burning at a safe distance from the cow, and most of the wreck "look" came from the camera's movement on a dolly track.

While on their date at the aquarium, Lucy and Henry kiss passionately in the walk-through shark tunnel exhibit. To insure the safety of these sharks in their aquarium habitat, handlers stood at the top of the tank to keep the animals from becoming disoriented by the extra lighting created by the production crew in the tunnel.

Doug (Sean Astin) proudly sprays down a large fish on the dock when his sister Lucy's sudden screams cause him to drop his catch and run into the house. The production used a fake fish for this scene.

The mounted fish trophies that grace the walls of both the Whitmore home and the Houkilau Café were supplied by the Sony prop house and ALII Antiques in Kanohe. A food stylist purchased and brought in a roasted pig for the luau scene at the beach.