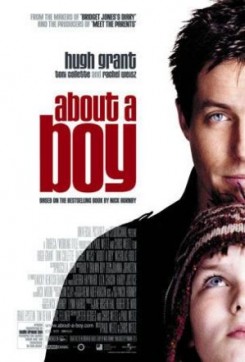 American Humane Association did not monitor About a Boy, which was filmed in the UK. After screening the film and making inquiries based on concerns about certain scenes, AHA obtained animal action information from the distributor and production. AHA is rating the film Believed Acceptable based on this information.

Marcus feeds bread to ducks swimming in a lake. The ducks were from the Royal Park and are owned by HRH Elizabeth II. On orders by the Royal family, these animals are never to be touched or handled. In addition to these ducks, however, six fake ducks were placed in the lake for when Marcus throws the whole loaf of bread into the lake and hits a duck, killing it. The live ducks were not near the action for that part of the scene.

A company called Animal Acting supplied the fish that swam in the beautiful aquarium that was built into the wall in Will's flat. The aquarium was designed and built by the art department of the production. The fish were transported to and from the aquarium on the set in polythene lined, heated, aerated boxes.