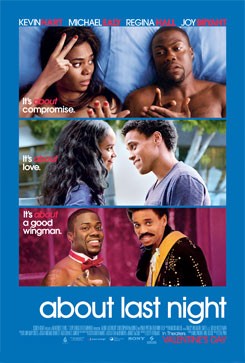 Romantic comedy which follows the highs and lows of two couples as they put love to the test.

Throughout the film, the lead actor has a dog seen performing such mild action as sitting/jumping/eating/lying/chewing, being held or petted, and walking/running on or off leash. For all of these scenes, trainers used hand signals and verbal commands to cue the mild action, which the trained dog was accustomed to performing. The barking/growling was also a trained behavior.

In the scene where the actors encounter dogs in cages on the street, the dogs were all well-prepped for this action. All the background dogs were placed in crates, and the hero dog was held in-arms by an extra. The set was shaded the entire time the dogs were working, and the dogs were let out of the crates every time there was a new shot to potty and drink water.

In the scene where the dog chews on the shoe, the prop department used a shoe that already looked chewed up. Then trainers smeared baby food on the shoe to entice the dog to chew it.

In the scene where the dog gets loose from the actor walking him, runs across the street with heavy traffic and into the actress’s arms on the opposite side, production controlled traffic for this scene. There were no moving cars during this action. Camera lenses were manipulated to make it look as if cars were closer to the dog. On action, a trainer called the dog from across the street. The dog ran across a secured path on the street and to the trainer.