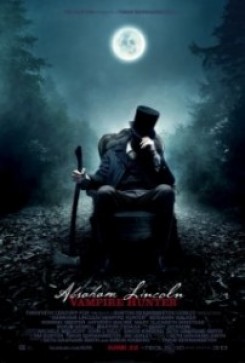 History has been rewritten for this story about the 16th President of the United States who abolished vampires along with slavery.

Seeing that Abraham Lincoln: Vampire Hunter is a period piece, taking place in the late 1800’s, and horses were always on set, the American Humane Association was there to make sure everything went smoothly. The running and galloping scenes were choreographed and vigilantly overseen by American Humane Association representatives, experienced in horsemanship. When teams of horses pulled wagons or carriages, the horses were familiar with each other and accustomed to the pulling action. Whenever horses were seen tied to posts and trees they were attached to lead ropes tied to posts.

A majority of the chase scene involving Abraham Lincoln and a vampire jumping from horse to horse was accomplished through CGI. In order to make the scene look realistic, production first took master shots of the horses running at liberty through cordoned off corrals. Post-production then erased those corrals and fences through CGI in order to create the image of the horses running in an open field (not to mention the image of Lincoln chasing the vampire and jumping from horse to horse). Any horses that appeared to be pulled under the stampede during the chase were created through CGI.

In the scene where the horses and carriage burst through the mansion’s window, in actuality the horses entered the stage via a ramp that was secured with rubber mats. The carriage and horses merely walked up the ramp and into the living room. This footage was sped up in post-production to make it look as if they burst into the room. After walking over the ramp, the experienced wrangler drove the team of horses through the mansion whose floors were covered in rubber mats. Trainers were off-camera to make sure the action was safely executed.

The battlefield scene was accomplished through a mixture of live action and CGI. Horses were placed at a safe distance from special effects cauldrons such as smoke machines.

In addition to protecting animals onscreen, American Humane Association representatives worked with professional wranglers who kept real life (not trained) alligators and snakes from harming other animals on set by safely guiding them back to their natural habitats.