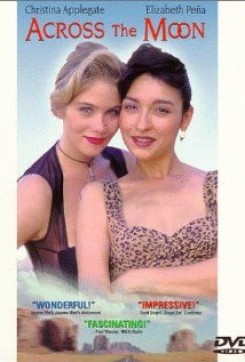 Across the Moon is a drama set in the desert and involves the trials and tribulations of two women who move there to be close to their boyfriends who are serving sentences in Tehachapi Prison.

When Lyle and Richie are caught in a drug deal, which is actually a police sting operation, they are sentenced to thirty four months in the Tehachapi Prison located in the Mojave Desert. Their girlfriends, Kathy and Carmen, along with Carmen's young son, Paco, move to the desert so that they can visit their men on weekends. Although they are from very different backgrounds, Kathy from Beverly Hills and Carmen from East Los Angeles, they bond through circumstance. Kathy's lawyer offers them his "home" in the desert which turns out to be a dilapidated trailer. Down to their last penny, the girls venture out as hookers and find they just can't do that. A local fireman, Rattlesnake Jim, befriends them and finds Carmen a job as a bartender. Kathy finds work at the local grocery and Paco finds he can easily skip school to explore his new desert home.

On one excursion, Paco encounters a lion walking out of the underbrush. The animal snarls at him, but then walks off to lie in the shade. The owner of the lion, Frank, tells Paco that the cat, Samson, is an old boy and has no teeth. Frank takes Paco to meet his other pet, Louie-Louie, an old tiger who is lolling around in the cool waters of a plastic kiddy pool. Since the cats are very hungry and Frank has no money, he resorts to stealing a couple of cows from a local cowboy. When the cowboy comes to collect what are now the carcasses of the cows, he and Frank have a shoot out and Frank accidentally shoots the cowboy. This lands Frank in the same prison as Lyle and Richie.

In the meantime, the girls are becoming great friends. Kathy marries Lyle to guarantee them conjugal privileges and Carmen starts to date Rattlesnake Jim. However, Jim has a vendetta against anyone who rides ATV's, "all terrain vehicles," because they tear up the desert and make lots of noise disturbing his peace and privacy. Jim eventually blows up two of the vehicles which lands him in Tahachapi Prison as well.

Paco encounters an old prospector who in his dying moment gives Paco a map to his gold mine. Paco finds the mine, but it was inadvertently blown up when Rattlesnake Jim blows up the ATV's. The girls seem to be fated to live in the desert and commute between trailer and prison.

Animal action is mild in this film and consists of a lion, tiger, cows, horses and a snake. The cows are seen just meandering in the desert herded by cowboys who pull up on horseback to talk to Kathy and Carmen. In a later scene the cows are filmed at night when Frank goes out to steal two of them. This scene is shot in cuts and both live and fake cows were used. When the cows are killed, you hear gunfire but never see the animals hit. You next see the hind legs of a cow being hoisted onto a truck. This was a fake cow. Later you see the cows being butchered at Franks barn. These carcasses were actually fake props with stage blood being used. Experienced wranglers herded the cows and also tended to them when not filming. In one scene where Kathy picks up a snake, the trainer prepared the actress prior to shooting and she merely stroked the animal, then gently placed it down.

Both the lion and the tiger were not really old animals. They were middle-aged and non-toxic make-up was used to age them. To get the lion to snarl at Paco when he first encounters the cat, one trainer held the cat while a second trainer stood just off camera and dangled a piece of meat on the end of a stick. He was later rewarded with the food. When the cats are seen walking A to B or lying down, they were responding to a trainer's verbal commands and given food rewards. The tiger enjoyed sitting in the cool water of the pool. When we see Frank walking over the hill leading Samson on a leash, the trainer had placed the leash in the actor's hand and remained near by just off camera. A second trainer just over the crest of the hill, used verbal commands to get the lion to come.