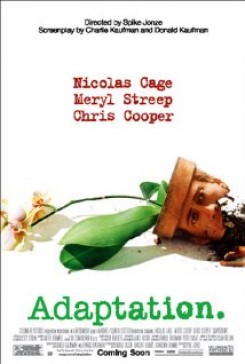 The film is an account of screenwriter Charlie Kaufman 's (Nicholas Cage) attempt to adapt Susan Orlean's (Meryl Streep) non-fiction book "The Orchid Thief", which is the story of John Laroche, a plant dealer who clones rare orchids then sells them to collectors. Both the action in the book that describes the transformation of orchids and Kaufman's struggle to adapt the book into a movie, illustrate the duel meaning of the word, adaptation.

In the beginning of the film there is a narration that accompanies different overlapping images on the screen. There are some animals in this sequence, such as a fox, reptiles, snakes and others. These images were all taken from stock footage that the production purchased, rather than filming animals specifically for this story.

As Susan is narrating her story, a snake is shown slithering on a branch. Later as Don and Charlie go into the water to escape from John and Susan, they see some snakes on a branch. A trainer put the snake on the branch and the camera filmed it crawling. Afterwards the trainer retrieved the snake.

The bees that buzz around flowers in one scene were computer generated.