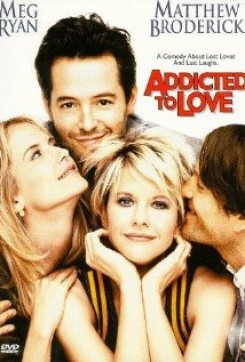 Addicted To Love is a comedy about two people, Sam and Maggie, who have recently lost their partners to another. Sam's girlfriend, Linda, has left him for Anton, Maggie's boyfriend. Maggie and Sam form a bond, as they both spy on their former partners and conspire to get even.

In another scene several cockroaches are seen lying in a box. Sam sees another roach running across the floor and he catches it with his hand, putting it in the box. This scene was shot in cuts. The wrangler placed the roach for the establishing shot and retrieved it at completion.

On the street a vendor is seen with a monkey on his shoulder. Then later the same monkey is seen running from A to B, jumping up onto Anton's shoulder and crawling around his shoulders, head, and back. This scene was shot in cuts. The trainer released the monkey and cued him with verbal commands and treats as a reward.

Sam is working in Anton's restaurant when a food critic arrives to eat dinner. Maggie shows up at the restaurant with a brown bag supposedly filled with cockroaches. Next, a cockroach is seen under the table where the food critic is sitting and Anton catches it in his hand. The cockroach is seen crawling up his coat sleeve and then several cockroaches are seen running across the floor. Anton notices another roach on the spoon about to enter the food critics mouth. He is unsuccessful in distracting the man and he supposedly eats the cockroach. This scene was shot in cuts. Real and fake cockroaches were used.