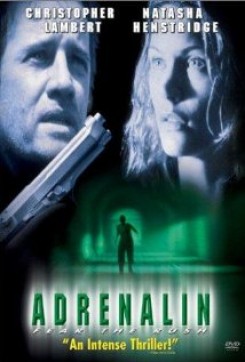 Adrenalin: Fear The Rush is a futuristic horror film about a psychotic killer who eats his victims flesh as he kills them. Four policemen arrive on the scene to check on a call about screams coming from an abandoned building. What they discover is a group of dead bodies with chunks of flesh ripped from their torsos. When they find the bodies they also encounter the killer and a chase ensues, ending up in an abandoned prison. After many mishaps and the death of one of the four officers, they are finally victorious in killing the monster and putting an end to the terror.

The animal action is very light with the use of a dog in one scene. During the chase scene, a policeman encounters a dog on a leash tied to a utility pole. The dog starts barking at the officer as he runs around the animal.