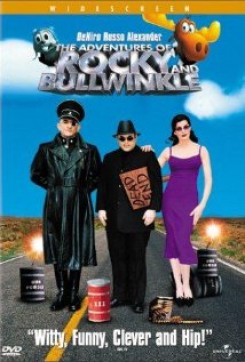 Adventures of Rocky and Bullwinkle, The

Our animated heroes, Rocky and Bullwinkle, are sent to Hollywood to stop Boris and Natasha. If you were a fan of the cartoon series from the 1960's you'll remember Boris and Natasha as the bumbling agents who work for Fearless Leader and are always sent to do his dirty work. They break out of the second dimension and try to take over the world in this comic mix of animation and live action.

On Fearless Leader's television network we see three men riding backwards on the same horse. The horse walks at a slow pace as the men enjoy the ride. This scene was shown three different times, the last time the horse is wearing sunglasses and a hat. There were two trainers on the set for this scene. One trainer doubled as an actor who sat on top of the horse. The other two actors were experienced riders. The three men mounted the horse. The other trainer stood just off camera with a bucket of food and called the horse over to him. In the scene where the horse is dressed in a hat and sunglasses, the trainer atop the horse, doubling as the actor, held the horse by the reins while the other trainer put the hat and sunglasses on the horse. The hat was held on by a chin strap and the hat was tied to the bridal of the horse. In the scene where the two dogs are being held on leashes at the guard station, the trainer released the dogs to the actors who walked the dogs on leashes. The trainer stood just off camera and retrieved the dogs after the scene. There are two scenes where a bloodhound dog is lying by his dog house, asleep. The trainer put the dog on his mark and told him to lie down and stay. The dog was so comfortable that the camera man was able to get a close up of his relaxed face without the dog reacting. The bird that is sitting on the post on the side of the road is not real. The prop was wired to the post so it appeared to be moving.