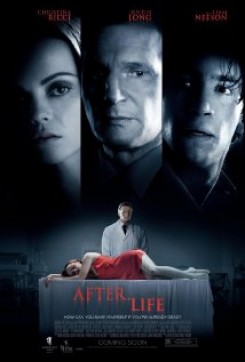 After a depressed woman is apparently killed in a car crash, she is convinced she is still alive at the funeral home. The mortician tells her he can communicate with the dead and that she should accept her fate, but her boyfriend suspects that she is still alive, too.

In Anna's (Christina Ricci) classroom, she and her student Jack (Chandler Canterbury) stand next to a glass container housing baby chicks. She picks up a chick and pets it. Later, Jack turns a light on and off above a box housing one chick, then puts a lid on the box and tosses dirt onto it, as if burying the chick alive. For these scenes, trainers placed chicks into a prop reptile container and later into a box, and allowed them to do whatever came naturally. The off-screen trainers carefully monitored the chicks and kept them warm while in the containers. The actors were introduced to the animals and instructed on their proper handling before filming began. For the scene with the box, the chick had been removed before the boy began placing dirt on the box, which was specially rigged to move as if the chick were inside moving.