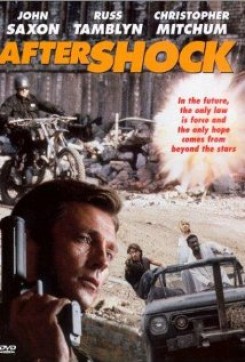 Aftershock takes place in a police state of the future where the citizens are brutally controlled by the militia. They arrived at this condition because the people stopped questioning their leaders. All people must have identification in the form of a bar code tattooed on their arm. Anyone who resists the police is executed. The police need little excuse to detain anyone. Three such detainees, two men and a woman, escape and there is a massive search to find them. The militia is most interested in the girl who has a I.Q. higher than any ever recorded and no bar code on her arm. It's suspected she's an extra-terrestrial.

There is minimal animal action where a soldier holds a puppy in his arms. In a scene at a bar, an exotic dancer has a snake wrapped about her.