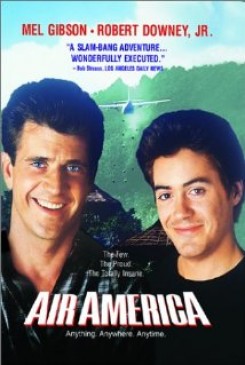 Air America is a comedy-action yarn about cargo pilots in Southeast Asia during the Viet Nam era. Based on fact, the pilots work for a commercial airline that is secretly operated by the C.I.A. Their cargo, supposedly guns and supplies for mercenaries fighting in Laos, is frequently drugs that help finance the U. S. war effort. The story focuses on the escapades of two pilots. The older pilot is a war-weary, Buddist-spouting cynic who is lifted out of his lethargy by his brash, idealistic, and somewhat naive, buddy. The film takes a satirical look at the unholy alliance between the U. S. Government and Laotian drug traffickers.

Filmed on location in Thailand, a variety of animals are seen throughout Air America. Sometimes the pilot's cargo is livestock as when pigs are carried in arm and loaded into crates on the plane. In a hail of gunfire, the pig-carrying crates are dropped by parachute into the jungle. According to the production company, the crates that were parachuted out of the plane contained fake plastic pigs. These scenes were filmed at a distance and you can't see the pigs clearly, just the crates suspended from parachutes. For close-up shots, several real pigs were placed in crates a few feet off the ground, and ropes attached to the crates were moved up and down to create the illusion of descent. To simulate the landing, breakaway crates were constructed and the pigs were lowered from the height of a few feet. In another scene, a plane crash-lands to avoid hitting two oxen on the runway. A golfer shoots at a lizard (this scene was shot in cuts and you don't see a hit - just the lizard and then the golfer shooting). Pheasants and exotic birds enhance several other scenes.