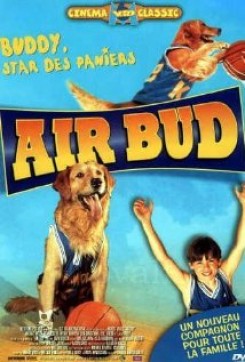 Air Bud is a film about Josh Framm, a lonely 12 year old boy, who befriends Buddy, a runaway golden retriever. While practicing basketball one afternoon, Buddy amazes Josh when he steals the ball and scores a basket. This turns out to be just the beginning for the duo, as they eventually make the school basketball team and Buddy's outstanding performance starts a media frenzy.

A golden retriever is seen throughout the film, playing basketball, traveling from A to B with an actor, sitting on a bed, floor, porch, sitting next to a group of children at a basketball game, lying under a bed, eating pudding, etc. For all of these scenes the dog was placed on his mark and cued with verbal and hand signals with food as a reward.

Buddy, the dog that the film's story is about, is featured along with two other golden retriever, professional animal actors. All of the actual basketball playing is done by "Buddy" with some of the running, jumping, sitting, and other minor physical labor done by his stunt doubles "Chase" and "Rush". The basketballs that were used with the dogs were lighter and somewhat more elastic, to make it easier for the dog to play.

There is a scene, where Buddy is in his dog kennel in the back of a truck with the tail-gate down, traveling down the road. The kennel is seen shifting from side to side and then sliding off the tail-gate and onto the road. This scene was shot in cuts. The kennel was well padded and was on casters and attached to two cables to control the sliding. When the kennel is seen moving a lot, someone was lying on the floor of the truck physically sliding the kennel back and forth and the tailgate was actually up. After falling off of the truck, the kennel is seen sliding down the road. For this shot, the kennel was attached to a dolly and pushed so it looks like it is skidding on the pavement. A camera was attached to the front of the kennel. There is a shot of the truck supposedly swerving as if it is being driven by a crazy driver. For this shot, the truck was in a stationary position with two men, each holding an end of a 6ft 2X4 that was placed under the truck. Then, an 8ft metal pole was attached to the top of the kennel. Two men, one on each side, held an end and moved the kennel as the truck wobbled back and forth.

While the kennel is in the road, a vehicle approaches and its bumper hits the kennel as it stops. The kennel falls over, the door opens and Buddy emerges. He walks over to the passenger side of the vehicle and looks at Josh. This scene was shot in cuts. The kennel was propped up at an angle and leaned on the bumper of the vehicle. The side was propped with a small block attached to a wire, which, when removed, made the kennel rock and the door drop open. When the door opened, the trainer cued the dog with verbal commands and food as a reward.

In another scene, Josh carries a filthy Buddy in through the front door and up the stairs. Later, in the bathroom, Josh tries to put Buddy into the bathtub and eventually throws a ball in the tub and the dog goes in after it. This scene was shot in cuts. The dog was placed in the actor's arms and he carried him from point A to B. To achieve the proper head movement and looks, the dog was placed on his mark and cued with verbal commands with food as a reward.

Later, Josh is seen first using a blow dryer and then a leaf blower to get Buddy's fur dry. Then for the final touches, he brushes Buddy's teeth. This scene was shot in cuts. The dog was comfortable with both the blow dryer and leaf blower. Both methods were only used for a brief time. When Buddy is getting his teeth brushed, the trainer, off camera, was holding the dog while the actor brushed his teeth with cream cheese.

There is a scene where Buddy climbs out of Josh's bedroom window, across the roof, down the trellis, onto a car and then to the driveway. This scene was shot in cuts. The dog was prepped prior to the scene. Foam pads were used under the trellis. The trainer released the dog and cued him to climb down with verbal commands and food as a reward.

Buddy is also seen several times climbing up the trellis and into the bedroom. These scenes were shot in cuts as well. Trainer #1 released the dog up the trellis while trainer #2 called the dog to the window and through it.

There is another scene where the trellis breaks as Buddy is descending. For this scene, only one take was made. Foam pads were placed under the trellis along with apple crates and a trainer was underneath to catch both the trellis and dog. The trellis was also hinged to a planter approximately one foot off of the ground.

In another scene, Buddy chases a basketball down some stairs and into a living room full of paint cans, ladders, etc. As the ball enters the room, it hits a ladder and it falls over, dropping a paint can to the floor. This scene was shot in cuts. The dog was thoroughly prepped prior to the scene. The ladder was attached to a wire which when jerked, pulled the ladder to the floor. The trainer released the dog after the ladder fell. The dog ran A to B under a table full of decorating supplies and gets caught up in a cloth, knocking everything to the floor. He gets soaked with wall paper paste and then shakes his wet fur, slinging paste all over the room. The trainer cued the dog with verbal commands and food as a reward. The paste was a mixture of skim milk, flour, and water.

When Josh goes to Snively's home to free Buddy, the dog is seen chained to the deck. The dog runs towards Josh and is jerked back when he gets to the end of the chain. Josh releases the dog and they run towards the fence, climbing over. This scene was shot in cuts. A choker chain was used and the trainer cued the dog with verbal commands and food as a reward. A trainer, off camera, ran alongside the dog to make sure the chain did not get caught on anything. Another trainer was on the other side of the fence cueing the dog with verbal commands.

There is a scene outside the courthouse where Buddy must decide whether he wants to go with Josh or Snively. The Judge is in his chair in the middle and Josh and Snively are on either side flanked by crowds of people. The dog looks from one to the other and finally after much shouting from both sides, he decides on Josh. The trainer placed the dog on his mark and trainer #1 was on one side of the yard and trainer #2 was on the other. Both trainers cued the dog with verbal commands to get him to look confused.

Other animal action consists of a bird seen on a town sign. In a few scenes, Snively threatens Buddy with a rolled up newspaper and a Josh's little sister taps him in the nose with a stick of sorts.