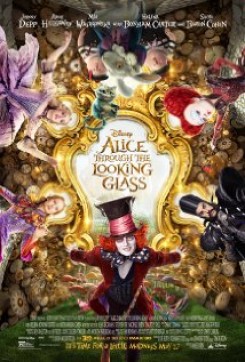 Alice Through The Looking Glass

Alice travels back to Wonderland to save the Mad Hatter.

All horseback riders were stunt riders or experienced actors who were skilled at riding, mounting and dismounting. All running/galloping scenes were well choreographed, and actors used caution while on and near animals.The horse(s) rearing was a trained behavior. When teams of horses pulled wagons or carriages, the drivers were experienced and teams of horses were familiar with each other and accustomed to the pulling action.

In the scene where the two actresses were drinking tea in the kitchen and we see a cat sitting on a chair near them, the trainer placed the cat on the chair and used hand signals to keep the cat stationary.

In the scene where Alice escapes from the institution, crawling out of the window, and we see pigeons on the roof, the pigeons were placed on the roof apex by the trainer and handlers. This position did not change for the pigeons, so they simply went to sleep as if they were roosting. The actors’ running was never closer than six feet to the pigeons.