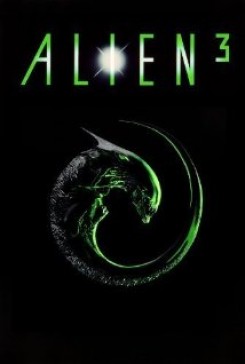 A spaceship crash-lands near an isolated prison facility thousands of miles from civilization and, of the four occupants, only one is still alive. A handful of rescuers from the prison and a dog discover an unconscious Lieutenant Ellen Ripley. The men take Ripley to the prison infirmary, but the dog lingers, barking at something else alive in the craft. It's an ominous-looking, reptile-like organism.

When Ellen regains consciousness, she is informed by the Chief Medical Officer of the prison, Mr. Clemmens, that a rescue team is on the way, but it will take a week to reach her. In the meantime, she is ordered not to mingle with the only other inhabitants of the dungeon-like prison. They are twenty-five men, former rapists, murderers, and child molesters, who have found religion. When she learns of the other deaths, she insists that an autopsy be performed on a twelve-year-old girl. She says they are looking for evidence of a contagious disease, but Clemmens suspects there's more to her concern. Ellen appears relieved after the autopsy uncovers nothing new and the girl's body is cremated.

The scene shifts to the inmate Murphy, who discovers his dog lying ill. The dog appears to badly injured as his skin is festering and he's bloodied from head to tail. Murphy runs out shouting, "What kind of an animal would do this to a dog!". The dog appears to be suffering as he rolls around. There is a shot where you do not see the dog, only a close-up of blood gushing, then a shot of an oddly misshapen dog, as a strange creature bursts from its body. It's the Alien and another bloody battle for survival has just begun.

Four different Rottweilers were used to portray the dog. Special non-toxic makeup was used. The dog's face was shaved in spots and a vegetable based bloody substance applied to the shaved areas. For various actions, the trainer gave the dog visual and verbal commands with food rewards. When the dog appears to be suffering and is rolling about, he was wearing a special harness. Two trainers held onto the harness and, with their hands out of camera range, pulled the harness back and forth about an inch in either direction. The oddly shaped dog from which the creature bursts was a special effects puppet. This entire scene was shot in cuts with an isolated shot of movie blood gushing.