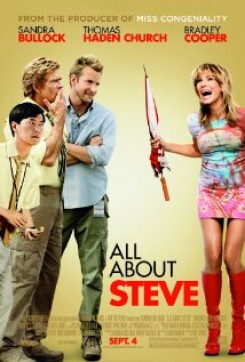 Mary Horowitz (Sandra Bullock) is a thirty-something crossword puzzle writer who still lives with her parents, who send her on a blind date with Steve (Bradley Cooper), a cameraman for the local news. Since he is the first man in ages who doesn't dump her in the first few minutes, she mistakes this for true love and proceeds to stalk him everywhere he goes.

During a police standoff with a criminal at a tourist attraction called "Wild Willie's Western Town," a swat team surrounds the buildings while horses stand in the background. When shots are heard, a horse falls "dead" to the ground, then gets back up, since, as part of the tourist attraction, it is apparently trained to fall down at the sound of "bullets".All the grounds were inspected for debris and all hitching posts were secured. No actual gunfire was used — it was a sound effect added in post-production. The background horses were placed on their marks and tied to their posts. The falling horse was indeed trained to lie down on command, which the wranglers cued. The ground on which the horse lay was made of special decomposed (soft) granite, which was thickly layered to give it extra padding. The actors and horses were well-rehearsed for the scenes.

A three-legged dog wearing a T-shirt hops around for a moment while people mill around outside a hospital. For this brief and mild action, the dog's actual owner played the role of the dog owner and guided the dog from one point to another. The dog was accustomed to wearing the shirt.

Due to limited resources, American Humane did not monitor some of the dog action or any of the gerbil action.