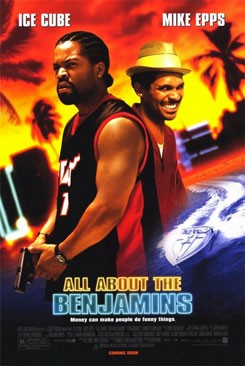 All About The Benjamins

A Miami bounty hunter, Bucum (Ice Cube), in pursuit of a bail jumper named Reggie (Mike Epps), inadvertently implicates them both in a major diamond heist. The dynamic duo decides to get a piece of the action by foiling the diamond thieves, forcing them to work out their personal differences along the way.

Bucum has a penchant for exotic fish and owns a large-scale aquarium, which he keeps in his home. In the beginning of the film, Bucum purchases a $600 fish and accidentally leaves it in its water bag on the dashboard of his car. The fish dies in the hot Miami sun due to Bucum's negligence. The dead fish was actually a prosthetic one. Rubber fish were also used when a gun is dropped inside of the aquarium. The live aquarium fish in the film were managed and cared for by Exotic Aquarium.

Later, an explosive blows up a fish truck and hundreds of dead fish crash down on Bucum's car. Production provided AHA with purchase receipts of dead fish from a local fish market, which they used in this scene.

The dog-racing scenes were filmed at Flagler, an actual Greyhound race track. The handlers placed the dogs on their marks inside the starting gate and were filmed running around the track.