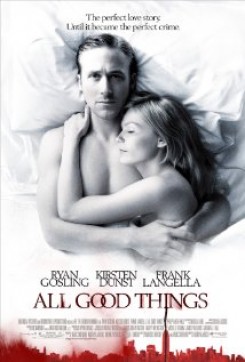 A detective tries to find out the truth about the disappearance of a young woman.

David (Ryan Gosling) is shown as a child in some home movies. In one that shows a birthday party, a man leads a pony in the background and then some kids ride the pony. The grounds were checked for hazards ahead of time, and only necessary cast and crew were allowed on the set. Trainers put the pony on its mark and stood just off-camera. The adult and child actors in this scene were well-rehearsed and instructed on the pony's proper handling before filming began.

The part of David's pet dog was played by a Siberian husky named Jordy, who is seen performing such mild action as walking on a leash and lying down. For these scenes, trainers used hand signals and verbal commands to cue the mild action, which the trained dog was accustomed to performing.

As the dog lies in the back seat of David's parked car, David enters the car and smokes a joint. Later, a woman smokes a cigarette and puts a bandana around the dog's neck. Both scenes were achieved in the same way. A trainer placed the dog on its mark and stood just off-camera. An herbal cigarette was used in both scenes and the smoke was blown away from the animal. The dog was not in the car when it moved.

When David's friend walks her two small dogs in her front yard, the automatic sprinklers go off. Trainers handed the dogs to the actress right before cameras rolled and dried the dogs off between takes. Off-screen trainers cued these two dogs for all of their other mild action.

The production provided documentation for the stock footage of the bee on a flower.