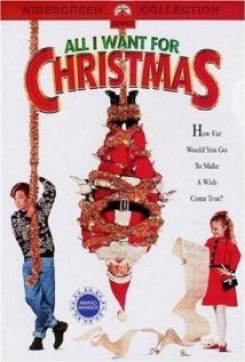 All I Want For Christmas

All I Want for Christmas is a story for the whole family of how two children, Ethan and Hallie Ophallan, try to get their divorced parents, Michael and Katherine, back together again for Christmas. The children must break up their mother's impending re-marriage to Tony, an opportunist. With quite an elaborate plot, much imagination... and a little help from Santa Claus, the children succeed.

In a scheme to frighten off Tony's mother, who has come over to the house to help make wedding plans with Katherine, Ethan and Hallie purchase eight white mice from the pet store. They take the mice home and let them loose in the house. However, their plan backfires when the maid opens the door and the mice scurry outside. One mouse does remain inside and decides to help himself to the woman's cake. When the woman lifts the plate to take a bite of cake, the mouse comes along for the ride. This was simply accomplished by the mouse being placed on the plate by the wrangler.

In another scene when Tony is taking Hallie to her father's diner, she takes her mouse, Snowball, along with her. As part of the plan to get her parents back together, Hallie makes a personal sacrifice and puts the mouse down on the ground and lets it go. (After all scenes where mice were released, they were immediately gathered up by the wrangler off camera.)

In the final scene Santa Claus comes to the Ophallan's door on Christmas day and hands Hallie the little mouse she had let go.

After filming was completed all the mice were given to one of the children in the movie to keep as pets.