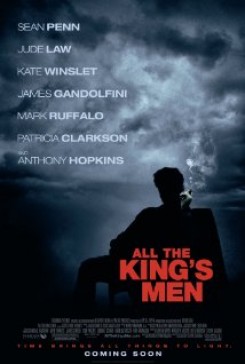 All The King's Men

This remake, previously adapted to film in 1949 and to television in 1958, is based on Robert Penn Warren's novel and explores the life of Southern governor Willie Stark, a political character loosely based on Governor Huey Long of Louisiana.

Although Safety Representatives monitored some dog action which was cut from the film's theatrical release, we were not able to directly supervise the rest of the animal action in All the King's Men due to limited resources and/or scheduling conflicts.

However, the production complied with all registration requirements, submitted a shooting script and relevant animal scheduling information and provided a pre-release screening of the film, as requested by American Humane.