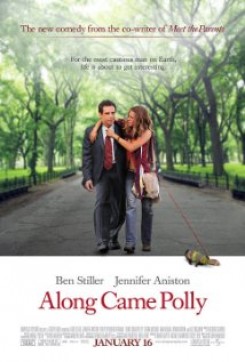 Not one to leave life to chance, insurance risk assessor Reuben Feffer (Ben Stiller) feels confident he's made a sound decision in wedding lovely real estate agent Lisa (Debra Messing). Just as their idyllic honeymoon in St. Barts begins, Claude, a French scuba instructor (Hank Azaria) with a penchant for strolling the beach "au naturel", sweeps the skittish bride off her feet and into bed, leaving poor Reuben wondering how he could have made such a huge emotional miscalculation.

Cringing with humiliation, Reuben returns home – alone – and ponders how to insure a future free from sentimental upsets. That is, until a serendipitous encounter with childhood friend Polly Price (Jennifer Aniston) shakes up Reuben's world and causes him to reassess everything he thinks he knows about love, relationships, and living in the moment.

Polly's scraggly, half-blind ferret Rodolfo elicits both laughs and groans in the movie as he careens into walls, trash cans, and even a palm tree. When not suffering these indignities, Rodolfo struts his stuff in a chic sweater and leash ensemble. American Humane (AH) Animal Safety Representatives monitored the animals in Along Came Polly throughout production, enforcing our Guidelines to ensure that No Animals Were Harmed™ in the making of this film.

As Reuben gallantly carries Lisa across the threshold of their honeymoon suite, both flinch violently when a lizard clinging to the ceiling beam does a freefall onto Lisa's lap. Though Reuben erroneously labels the offending reptile a Komodo Dragon, trainers confirmed that the petite plummeting lizard was indeed faux. To achieve this shot, the camera first filmed a real lizard perched atop a railing inside the hotel room while its trainer stood off camera. The production team purchased three fake lizards and had them painted to resemble the real lizard for that harrowing shot.

When Reuben visits Polly's East Village apartment for the first time, he comes face to face with a mangy-looking ferret named Rodolfo that Polly unearths from a pile of clothes. After giving him a quick hug, she sets the animal on the ground and Rodolfo dashes across the floor, running right smack into the wall. Trainers worked with Aniston to teach her how to hold the ferret properly, and puppeteers used an animatronic ferret for the segment where Rodolfo runs into the wall.

Moments later, Reuben's Irritable Bowel Syndrome acts up and sends him to the toilet in a mortified panic. Rodolfo wriggles under the bathroom door and noses around for a bit before hightailing it out of there when the toilet overflows. To set up this scene, crew members crafted a waist-high platform with a partial door that had a cutaway bottom. This made working with the ferret much easier for the trainer and prevented any discomfort for Rodolfo as he slipped under the door.

In another scene, Polly and Reuben join risk-taker extraordinaire Leland Van Lew (Bryan Brown) on his sailboat and must contend with a freak storm. Rodolfo pops up from Polly's toiletry bag looking like a scruffy stowaway, and soon after the squeaking ferret ricochets like a pinball across the bottom of the boat. For the shot in Polly's cosmetics bag, trainers placed the ferret in the luggage just long enough to get the shot, and then quickly removed him. A fake plush ferret was used for the slipping and sliding action, with squealing sound effects added in during post production.

Toward the end of the film, Reuben realizes he will lose Polly forever if he doesn't make his true feelings known. He rushes to her apartment, only to discover that his absent-minded love interest has tied Rodolfo's leash to the front door of her building and taken off without her furry companion. Reuben grabs the leash and starts off down the street in search of Polly when she rounds the corner frantically sounding the key finder. For this scene, Rodolfo appears decked out in a punky green sweater and pink harness/leash with a key finder attached. Trainers placed the ferret on his mark and tied the leash to the doorknob. An off-camera PA slowly opened the door while the trainer stood behind it. Once on the sidewalk, a trainer handed the actor Rodolfo's leash and walked in front of the ferret with a buzzer and an extended fork with a Nutracal treat on it. The ferret had been trained to run to the sound of the buzzer and felt comfortable walking with the actors for this scene.

As Polly and Reuben stride down the street discussing the fate of their relationship, Rodolfo shuffles alongside them on his leash. Poor vision once again bedevils him and he collides with a trash can on the sidewalk. The props department replaced Rodolfo with a fake pull-along ferret for this sequence since the actors easily outpaced the animal and his little legs just couldn't keep up.

Reuben finally convinces Polly to take a chance on him by grabbing and eating a handful of "germy" peanuts from a street vendor. To further prove he's losing some of his neuroses, Reuben drops a handful of peanuts on the sidewalk and then picks them up and pops them into his mouth. Rodolfo, meanwhile, appears content to join him in nibbling on the contaminated nuts. To create the impression that Rodolfo relished the peanuts, his trainer put baby food on a few of the nuts and kibble on the ground nearby.

The film closes with Reuben and Polly back in St. Barts for a romantic vacation. Suddenly, Rodolfo emerges from a beach bag and smashes into a palm tree. Once again, an animatronic ferret replaced the live animal for this shot.