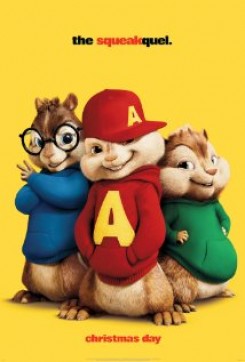 Alvin And The Chipmunks: The Squeakquel

Now successful musicians, the chipmunk brothers Alvin, Simon and Theodore are forced to attend high school. But when their corrupt, greedy former manager Ian (David Cross) discovers the female chipmunk siblings the Chipettes, he uses them to try to strike it rich again and cause turmoil in the chipmunks' lives.

All chipmunk action in this film was computer-generated imagery; there were no live chipmunks in the film or on the set.

Ian talks to a rat while listening to the radio in a basement, and then throws the radio at the wall. The rat is on a ledge and steals a muffin before walking off. The set was an enclosed area and stunt pads and fake trash surrounded the rat. Trainers placed the rat on its mark and cued it to stay. The well-rehearsed actor threw the prop radio a safe distance away from the rat. The actor took a bite of a real muffin and then subtly replaced it with a fake muffin. The rat was cued to put the fake muffin in its mouth and walk off with it. Trainers used a buzzer to cue the rat to walk away, and they retrieved the rat right afterward.

American Humane also monitored a scene involving rats in costumes, which was cut from the theatrical release but might come back on DVD.

A dog lies beside a family watching a big-screen television inside an igloo, staring up at the screen. The dog then gets up, barks, runs to the screen and knocks the TV over with its paws. The dog stands on the TV and paws at it. This scene was filmed inside an enclosed fake igloo with a fake, lightweight TV prop. The prop was rigged to a string, which a crew member pulled in a choreographed move to get it to fall down right as the dog placed its front paws on it. A trainer placed the well-rehearsed dog in a "down-stay" position and stood near the TV, using a "look stick" to get the dog to look at the fake TV. The trainer then cued the dog to come and then to put its paws on the TV and bark. As the TV fell, the trainer cued the dog to get on it and "dig" at it.

A Chihuahua on a leash stands with a couple waiting for an elevator. After Ian and the Chipettes exit the elevator and walk down the hall, the Chihuahua gives them a look. For this brief and mild scene, trainers handed the leashed dog to the actors right before filming. The actors and dog had been well-rehearsed for the action and the dog was unfazed by either the mild noise the elevator made or the actor walking by with stuffed chipmunks on his shoulder (which were changed to CGI chipmunks in post-production). Trainers then cued the dog to "stare."

While Toby (Zachary Levi) stands nearby, a cat sits next to a bush, hisses and then swats its paw at the air, as if reacting to Toby's presence. This scene was filmed in separate shots. The actor and cat were not in the scene together. Trainers placed the cat on a waist tie for safety and then hid in the bushes, cuing the cat with a bait stick to look in certain directions. A trainer then used a stuffed-animal hand puppet to get the cat to hiss and swat.

An eagle sits on a tree branch, staring down at the chipmunks. It then flies from the branch to the ground, hopping over Theodore and staring down Alvin. It flaps its wings and walks to the end of a cage near a fence, at one point cocking its head to the side. The cast and crew members allowed on set were limited and they were instructed on staying a safe distance from the bird so as not to disturb it. A trainer placed the bird on its mark on a branch and equipped its leg with a monofilament line attached to a jess. The trainer crouched on the ground and cued the eagle to fly to his glove. Later, when the eagle was on the ground but still on a monofilament and jess, it was cued to hop toward a food reward held by an off-camera trainer. Crouching trainers used food and bait sticks to get the eagle to go in certain directions near the camera. To get certain looks or stares, the trainer stood right next to the eagle, just out of camera frame. When Theodore appears to kick the eagle, this obviously never really happened, since the chipmunks were CGI.

Production provided documentation for the zoo stock footage and the footage from the Meerkat Manor TV show.