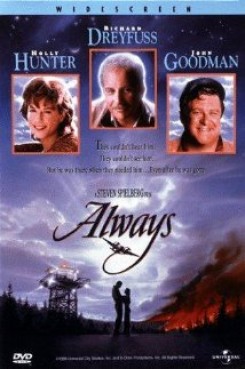 Always is a romantic fantasy about Pete, a pilot who fights forest fires from the air. He's the kind of fella who thrives on adventure and takes chances. This upsets Dorinda who loves Pete. She works in the airport control tower and has nightmares that Pete's "number is up." Just after she convinces Pete to take a safe job as instructor for pilot fire fighters, there's a new fire. Dorinda's worst nightmare comes true when Pete is killed in a spectacular aerial rescue. He died before Dorinda could ever hear him tell her he loved her.

We next see Pete walking with Hap, a lovely lady clothed in white. Hap tells Pete she deplores what's happened on earth in the year since Pete died. Pete will be sent back to earth to give inspiration. People won't hear him, but if he reaches them, they'll receive it as their idea. He's assigned to fire fighter trainee. Ted Baker, a clumsy pilot, who has fallen in love with the still grief-stricken Dorinda.

Dorinda's pet cat is in several scenes. An elk is seen several times in the forest.