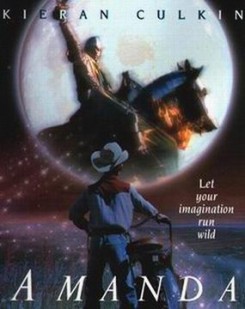 Amanda is a film about an extraordinary horse and a boy named Biddle. Biddle and his family live on a horse ranch in the 1950's. One day Biddle has an accident, when he falls off of a horse. Because of this one incident he is left with a defect to his right eye and is gradually loosing his sight. From that day on, Biddle develops a fear of horses until Amanda, a huge Shire Horse, comes into his life.

There are a few scenes where the horse Amanda is seen bowing, jumping a fence, pawing the ground with his hoof, shaking his head up and down, pulling a wagon etc. All of this action was pre-trained behavioral stunts accomplished when cued by the trainer. There is also a scene where Amanda is seen opening her gate in the barn with her mouth. The trainer merely used voice commands to cue the horse to use his lips and mouth to lift the latch.

There are two battle scenes where Amanda is seen along with several other horses in full armor. Trained rearing and falling horses were used for these scenes. The battle field was covered with 1 1/2 feet of shavings and sand, acting as a cushion for the horses. All of the riders were professional stunt-doubles using rubber spears and swords.

In another scene, Biddle is in a church and Amanda comes into the building. Biddle runs out of the church followed by the horse. Amanda catches up to the boy as he rides his bike home and nudges him from behind with her nose. A stunt-double was riding the bike and the horse, on cue from his trainer, nudged the mans back. There is also a scene where the horse picks up the boys bike and carries it away. For a safety precaution, the trainer placed a pad around the area of the bike that the horse picks up. On cue from the trainer, the horse picked up the bike with his mouth and carried it a short distance.

In the rodeo scenes where Biddle supposedly rides Amanda in the pole race, a stunt-double was used. When the horse is seen jumping the fence it was a pre-trained behavioral stunt accomplished when cued by the trainer. Stunt-doubles were used for the other rodeo competition scenes involvingg young actors. For the rodeo scenes of the bucking horse and rider, pole racing, and steer roping, professional riders were used. For safety precautions, a wool pad was placed around the loose fitting rear flank strap of the bucking horse. During the steer roping event, the wrangler placed a leather collar around the steers neck to prevent rope burns from occurring. There are a few scenes where young actors are seen on a horse and it rears. For these scenes a stunt-double and a trained rearing horse were used.

There is a scene where Biddle, Kaleb, his father, and Kelsey, his brother, are involved in a truck accident while they are returning home from the rodeo. A calf walked across the road and Biddle's father swerved to miss the animal. The horse trailer broke free of the truck just before the truck was flipped several times. Kaleb is penned inside the truck so Kelsey takes one of the horses and goes back to town for help. In the meantime, Amanda is seen galloping around the corner of the field. She still has her saddle on from the rodeo, so Biddle attaches one end of the rope to the end of the truck and the other end to Amanda's cinch. Amanda pulls the truck upright and then a thud is heard and Biddle sees Amanda laying on the ground. Small traces of blood are seen around the cinch area. For this scene the Fire and Rescue Department were on the set and placed inflated air bags on both sides of the truck to push on the back wheels. The horse had a rope tied around the saddle horn and the rope looks as if it is attached to the truck. However, the horse was never attached to the truck. The truck was secured with cable and pulleys which did the actual pulling of the truck in the scene. When Amanda is seen on the ground dying, she had been mildly sedated by a veterinarian for this scene and stage blood had been applied to he cinch area.