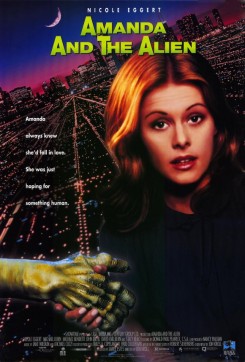 Amanda and the Alien

Amanda And The Alien is a romantic comedy set in San Francisco about an alien who in his/her natural state is a jellyfish-like creature who can take over the body of a human. The alien escapes the military complex, where he is being held, by taking over the body of a guard. He then goes to the cafeteria where he sees Connie, a worker, leaving for the day. He enters her body, enabling himself to get off the base without being stopped.

Once he is outside, he is befriended by Amanda, an artist, who is interested in helping him get to his rendezvous point, the Hollywood sign. In order for the alien to be rescued by his people, he must get to the sign by noon the next day. Amanda has read in the paper about the government agencies that are looking for him, so she invites him to her house and he accepts her offer. However, it isn't long before the F.B.I. pays them a visit to ask some questions. Through the course of their adventure, Amanda and the alien fall in love. They make it to the sign in time, but as the alien turns back into his jellyfish like state, he vows never to forget Amanda.

Animal action is simple. When Amanda and the alien first arrive at her house, her cat runs across the sidewalk to the front door. Then as they approach the door, the cat backs up and hisses at the alien. Amanda bends down and strokes the cats' head. For this behavior, the cat was merely responding to voice and hand commands from his trainer with food as reward.