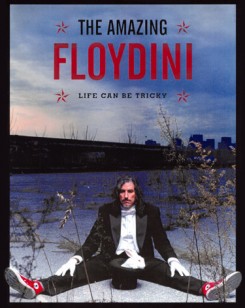 On the eve of his 40th birthday, Floyd (Gabriel Barre) decides to pursue a career as a magician. When he meets and falls in love with his new assistant Lulu (Barbara Christabella), the duo perfects a wallet disappearing trick that turns his magic career into a one of full-time crime. When Lulu eventually runs off with all the money, Floyd faces the bittersweet revelation that you're never too old to find your place in life.

In one scene, Floyd goes to a pet store to purchase a rabbit for his act. This was filmed inside a real shop – Petland Discounts in Brooklyn, New York, but a trainer supplied and maintained the rabbit and gave the actor handling instructions before filming began. In one of Floyd's acts, he takes the rabbit out of a wooden crate; in another, he pulls it from a hat. The trainer placed the rabbit inside these items just before the cameras rolled and removed it immediately on cut. During a children's birthday party, Floyd's rabbit hops away among the kids. A trainer instructed the children how to behave and made sure none of the kids picked up the rabbit, which traveled to a second trainer waiting off camera. Later, the rabbit is seen lying dead in its cage. The production made a stuffed rabbit expressly for this scene. Rats In one shot, a couple of rats crawl beside Floyd's bed. In the next scene, Floyd buys some mouse traps and a rat again runs along the floor as Floyd tosses and turns in bed. The rats were brought to the set in a release box, and there were no actual traps in the area. One trainer released three rats from the box and another handler stood at the other end of the bed using a clicker to cue the rats into a retrieval box. Trainers lined up apple crates alongside the bed to help the rats walk in a straight line. Roaches During one scene, a roach crawls on the floor and passes by some other roaches that barely move. Madagascar roaches were used for this footage because they are slow by nature. The insect wrangler placed four roaches in the middle of a plate and then spread Vaseline around the edges, knowing the roaches would not cross the sticky petroleum jelly. The other roach was placed on the floor nearby and it crawled around naturally. All of the roaches were retrieved afterward and returned home with the wrangler.