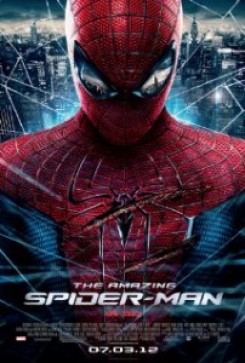 After getting bit by an exotic, laboratory created spider, Peter Parker aka Spider-Man embarks on a journey to find out what happened to his parents.

The animal action in The Amazing Spider-Man was very mild since the super hero himself stole most of the spotlight from animals and spiders alike.

In the scene where an actor injects a white lab mouse with a syringe, the syringe was fake and retractable. Trainers advised the actor on how to hold the mouse gently in his hands.

The villain in the movie is known as Dr. Connors, aka The Lizard, had a host of the amphibians in his home. In a scene where Peter Parker visits Dr. Connors, the house is filled with lizards in aquariums in the background. Trainers paid close attention to the lizards on set and made sure the temperature in the house was monitored for their body temp.

In the scene on the roof of a building where we see pigeons wandering in the background, trainers placed the birds along the edge of the building and stood off-camera to monitor their action.

The dead reptiles in jars were fake, production provided documentation.

The scenes involving crawling lizards and spiders were all done by CGI.