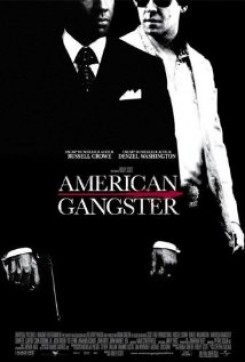 American Gangster is based on the true story of Frank Lucas (Denzel Washington), a 1970s Harlem drug lord who imported heroin in caskets of American soldiers killed in Vietnam.

In one scene, a police officer on horseback waits outside a funeral. Vehicles and crowds were kept at a safe distance from the horse and rider. A trainer helped the actor onto the horse right before filming began and waited just off-camera. The street was closed off to traffic.

At a reception, a dog sits next to a woman in a chair. Frank (Denzel Washington) calls the dog and kneels down to pet it. A trainer placed the dog on its mark next to the chair. A second trainer stood right behind the actor, out of frame, and verbally cued the dog to "come." The dog stopped at the actor to allow the actor to pet it and then continued to the off-screen trainer. The dog was comfortable with the roomful of extras required for the scene.

Frank works at his desk as the dog sits in the next room. The trainer placed the dog on its mark and stood off-camera, giving the dog verbal cues.

A dog and some chickens walk around a country yard. Several chickens were tethered with lightweight monofilament ties attached to their legs and held by a trainer. A few chickens roamed freely and were kept at a safe distance from the dog, which was in a separate, fenced-in enclosure nearby. Several trainers stood just off-camera to supervise.

A woman walks her dog on a leash past Frank and his dog. The leash was handed to the actress right before filming began. Frank's dog was put on its mark and an off-screen trainer cued it to walk with the actor. The actors and dogs were introduced to each other before filming began.

Two large dogs are leashed outside on a porch. Trainers tied the leashes to the front door and from out of camera range, verbally cued the dogs to bark and sit.

Frank plays fetch with his dog on the beach. Trainers remained just out of camera range and verbally cued the dog to go to the actor. The dog was happy to play fetch with the actor for the scene.

A turkey in a cage sits on the porch of a house as a car explodes in the background. The trainer transferred the live turkey from his transportation crate to the wire prop cage right before filming began. Several secured apple crates elevated the cage on the porch. The turkey was kept a safe distance from the exploding vehicle.

A man taunts Frank's dog from outside its enclosure. The dog barks, growls and pulls on its chain. A second man shoots the dog. Both men step over the dead dog to search the doghouse. Trainers walked the dog into the enclosure and secured its collar to the chain. The trainers stood off-camera using hand signals to get the dog to bark, growl and tug on the chain. The dog was removed prior to the gunfire and the editing implies the dog being shot rather than showing it. The production provided documentation that the dead dog was fake.

American Humane did not monitor scenes with pack mules in Thailand.