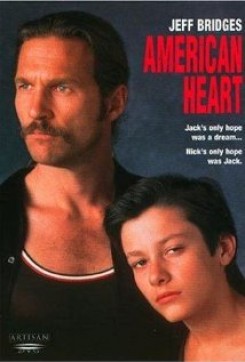 American Heart is the heartwarming story of how an ex-con, after just being released from his five year prison stay, must try to adjust to real life, which includes his 13-year-old son, whom he hardly knows.

When Jack is released from the penitentiary he is unaware that his son, Nick, has come to the bus station to meet him. Nick has left his aunt's house to come and live with his father. This was not in the scheme of things for Jack, though. After several attempts of trying to ditch Nick, it becomes apparent to Jack that the boy has made up his mind and is here for the duration. Jack finds a little dump of a room for the two of them to stay in and begins his new life as a window washer. We follow father and son through their getting aquainted period, as they try to adjust to their lives as a family, and Jack, as he tries to adjust to his life without crime.

Animal action is minor. One of Nick's neighbors has a small dog as a family pet. The dog is seen being picked up and petted, walking on a leash and sleeping.