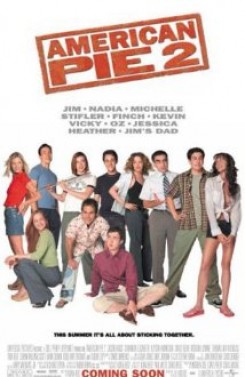 The characters from the 1999 original, American Pie, are reunited as their first year in college comes to an end. They decide to spend the summer together in a house on the lake and make it the best vacation ever.

The voices of the young men and women having sex end up on speakers in a fast-food restaurant, a police department and a truckers CB radio. The truck driver has a Basset Hound seated next to him. The dog looks on as the driver listens to the radio while driving down the road. A trainer placed the dog on the seat and stood off camera holding up the dog's favorite toy to get certain facial reactions. Although it looked as if the truck was moving, this scene was filmed in front of a green screen and the truck remained motionless.

A small monkey is seated on a table next to a young man and they are both holding shot glasses. The young man fills the glasses from a bottle and he and the monkey toast and drink. A trainer set the monkey, named Crystal, on the table next to the young actor seated in the chair. Her trainer stood off camera and used hand signals to cue the action. The bottle was actually filled with apple juice. Later Crystal is shown sticking out her tongue. The trainer set the monkey on its mark and verbally cued it to stick out its tongue.