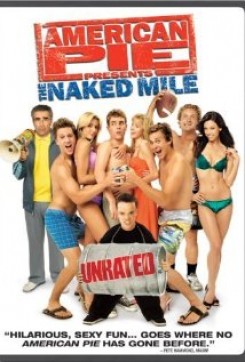 American Pie Presents: The Naked Mile focuses on Erik Stifler (John White), a youngster who is nothing like his wild relations, Matt and Steve Stifler. His buddies begin to pressure him to live up to the legacy of the other Stiflers. They persuade him to attend the "Naked Mile," a naked run across the college campus.

Tracy (Jessy Schram) and Erik are riding horses when they come across a low fence post that Tracy's horse easily jumps over. Erik attempts the jump and his horse rears up, knocking him to the ground. Tracy dismounts and runs to his rescue. This scene was shot in a series of separate "insert" shots. The actors took riding lessons before filming began and were filmed riding the horses in a field under careful supervision of seven trainers, some of whom were mounted on horses off camera. Stunt riders or trainers doubled for the actors when the horses jumped and reared. A nine-year-old gelding named Captain Oats was brought in as the jumping horse, since jumping is his special talent, and an 18-year-old quarter horse named Hilda was brought in as the rearing horse. The grounds were checked ahead of time to make sure it was safe for the horses.

In a brief scene, Erik stands in a field while a goat stands behind him. A 3-year-old female goat named Cath played the part. The area was inspected to make sure it was clear of any debris and holes. The goat was placed on its mark and some twine was attached to its collar and tethered to a stake in the ground by the wrangler. The wrangler stood off camera using cues to get the goat to look around and make noise.

In another scene, Erik kisses his date goodbye as a capuchin monkey climbs up from her hip onto her shoulder. A male capuchin named Ty played in the brief scene. The trainer held a safety meeting for all cast and crew members regarding the monkey being on set. The day before the scene was filmed, the actress and the monkey spent some time together getting to know each other. The next day before the cameras rolled, the actress and monkey spent more time together on the set rehearsing the scene. To achieve the action, the trainer was crouched down off camera beside the actress holding the monkey. He placed Ty on her hip and Ty crawled up to her shoulder. A leash was secured to Ty at all times and held by the offscreen trainer.

As Erik is trying to make it to Tracy's house, he runs out of gas and sees a horse off to the side of the highway, on the grass. The area was checked before hand to make sure it was safe for the horse, and the road was closed to traffic. The horse was placed on its mark and the trainer stood just off camera.

When Tracy's father opens the front door of his house, he sees Erik sitting on a horse. After speaking to him, Erik turns the horse and rides off. The trainer held the horse on its mark and the actor mounted it right before filming began. Another trainer stood across the lawn and retrieved the horse and actor when they reached him.

Erik arrives at a party by jumping over a hedge on horseback. A safety meeting was held by the wrangler, and limited cast and crew members were allowed to be present during filming. An American Humane Safety Representative inspected the area before filming, and some low branches were cut and removed for safety. A 13-year-old gelding named Livingston played the part of the horse. Livingston is an experienced show jumper, so he was very at ease with the action. This scene was filmed in two separate shots that were edited together in postproduction. The first shot was of the trainer riding the horse over the hedge as several party guests scatter. For the second shot, the trainer held the horse while the actor mounted it, then released the horse, and the actor rode a few feet to a second trainer, waiting off screen.

The production provided documentation that the frogs being dissected in one scene were either fake or not harmed for the purposes of filming.