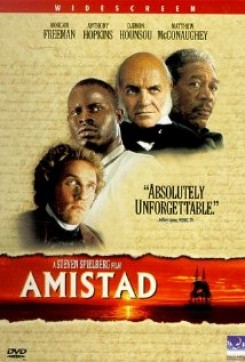 Amistad is a film about the 1839 mutiny aboard the notorious slave ship, the Amistad. In the aftermath of the mutiny, the Africans find themselves once again prisoners after floating into Long Island. They stand trial for murder, however, due to the belief of a few Americans who claim the Africans were the property of no one and were taken from their land against their will, they are freed by the American judicial system.

The animal action consists of horses and horses pulling buckboards traveling from A to B in the background. There are a few scenes where men are supposedly traveling from one town to another on horseback. There is also a pig in a lawyer's office.