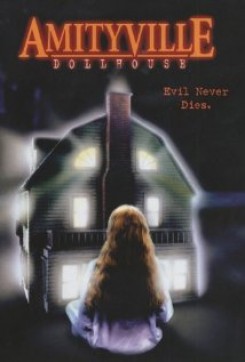 Amityville Dollhouse is a film about a family that moves into a new house built on land where the previous house had mysteriously burned to the ground. Unbeknownst to anyone in the family, is, the house that burned was haunted and known as the Amityville House. Bill, the father, finds a replica of the burned house in an old shed and cleans it up for his daughter's birthday. After putting the dollhouse in her bedroom, strange things start to happen to everyone.

There is also s scene where a daddy long legs is seen crawling on a box. In another scene, Todd, the oldest son puts a fake spider inside a piÓata however, when Jimmy, his stepbrother cracks it open a real spider falls on the boys face. Jimmy, afraid of spiders, freaks when the spider is on him and swats the spider off of his back. The spider is then seen on the porch just before Tobias, their uncle smashes it with his boot. This scene was shot in cuts. A fake and a real spider was used for the scene. A fake spider is seen falling out of the piÓata and a real spider was then placed on the actor. A fake spider was used for the shot of the actor supposedly smashing the insect with his boot.

In several scenes there are insects seen dead and preserved in wooden boxes with glass tops. In one scene one of the wasps comes alive and is seen flying around the room. Then the wasp is seen crawling on the actor's face and inside his ear and his stepmother is seen extracting the wasp with a sharp instrument. This scene was shot in cuts. A fake and a real wasp was used.