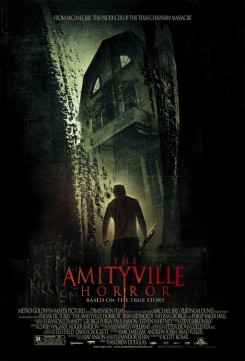 This remake of the 1979 classic horror film tells the disturbing tale of the famous haunted house in the town of Amityville, Long Island. George and Kathy Lutz move into their "dream" home despite the fact that the previous owners were brutally murdered by their son, who revealed to police that the house told him to do it. Will the new family be strong enough to get out before it's too late?

The part of Harry, the family dog, was played by a border collie named Red who was familiarized with the actors and crew members before filming began. To encourage the dog to run and play in various scenes throughout the film, trainers hid treats in the actors' pockets and stood out of frame using hand signals and verbal cues that elicited the desired action. For scenes in which the dog barked and growled, a trainer achieved this action by verbally cuing Red from off camera. Treats were hidden on the ground to entice the dog to dig.

In one scene, George Lutz (Reynolds) kills Harry in the boat house. For this scene, George hit a fake dog with a hatchet. When Harry appears dead after the attack, the real dog was covered with fake non-toxic blood and asked to lay down by the trainer. Red received many treats when this scene was over.

Flies that attack the priest in one scene were computer generated imagery (CGI).