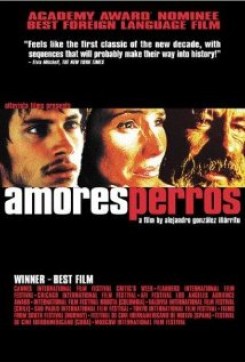 Amores Perros, translated to English as Love's A Bitch is a dramatic and violent triptych of stories illustrating love and loss in modern Mexico City. Three stories are overlapped and the characters lives are intertwined in a fatalistic tapestry that uses the human/animal bond as a metaphor. In each story the human condition is reflected in the parallel lives of the dogs that share their owners' worlds and become joint victims to its extreme violence.

Although the film is a Mexican production it displays an English language disclaimer at the beginning of the film that states no animals were harmed. American Humane Association did not monitor the production and the disclaimer is unauthorized by AHA. The filmmakers submitted a behind-the-scenes video, The Dogs of Love's a Bitch, on the making of the film. The video included interviews with the trainer and the actors that described how the animal scenes were accomplished.

The most disturbing of the violent animal scenes take place in the first story that paints a bleak picture of the life of a young man, Octavio, who is drawn to the culture of dog-fighting rings. Octavio's dream is to escape the world of poverty and his abusive brother and rescue not only himself, but also his sister-in-law, Susana, with whom he has fallen hopelessly in love. His only hope of raising the money for the escape is to fight his dog, Cofi, a Rottweiler who he discovers is a champion, fighting dog.

Cofi's rise in stature in the underground fighting ranks is illustrated in a series of graphic dog-fight sequences. The animals appear to show aggression towards one another and the fights appear to have the animals make contact. They are followed by shots of dogs lying dead, covered in blood. When the "dead" dogs are carried off they appear to be identical to the live dogs and very limp.

For the fight scenes, trainers used dogs that played aggressively with one another and were pre-trained as security dogs. In the making-of video, the actors and trainer explain that the dogs spent at least a month prior to filming in training with the actors. For the attack scenes, it illustrates specially trained staff working the dogs with padded arm protection and several handlers. The shots that appear to have the dogs making contact are explained as having been shot in cuts that include contact play behavior. The dogs in the video are shown off camera and appear to have an established bond with the actors, handlers and each other.

The mouths of the fighting dogs were limited using string mussels that wrapped around the nose area and behind the ears of the dogs. Disguised by make-up and the dogs' fur, these could not be detected by the camera. The mussels kept the mouths closed enough to allow the dogs to breathe unencumbered, provide the tongue ample room to move in and out and give the appearance of biting without harming each other. In the video, the trainer demonstrates applying the mussel to a dog that appears to calmly accept this apparatus.

After the fights, when dogs appear to be dead and injured, fake blood was applied to the animals and they look lifeless. However, production has explained that the dogs were tranquilized under the care of a veterinarian to achieve this limp effect. Four veterinarians and 3 to 4 nurses were on hand throughout production. Several matching dogs were used for scenes that required a variety of points of view and took quite a while to film so that no one dog would be under the influence of the drug for more than twenty minutes at a time.

Cofi's success angers one of Octavio's rivals who shoots the dog during one of the fights. As Octavio races to get the dog medical attention he drives fast and erratically through the streets of Mexico City. When he runs a red light, the car crashes into another car, killing his friend, critically injuring Octavio and the other driver, and leaving Cofi bleeding and unconscious in the back seat.

There is no program of humane oversight for film in Mexico. Therefore, AHA appreciates the voluntary efforts of the Mexican trainers and handlers who have demonstrated a deep concern for the welfare of the animals in their care during the production. However, although the dogs were unharmed, tranquilization is not allowed under the AHA Guidelines for the Safety of All Animals in Filmed Media. AHA believes that tranquilization of an animal is a risk that we do not recommend for the purposes of filmmaking. Also, AHA's Guidelines are not utilized in Mexico. For these reasons, AHA has rated the film "Questionable".

The film continues with the second story. In this love triangle, a man leaves his wife and family to take up residence with his lover, Valeria, who is a supermodel. Valeria is lovingly attached to her Lhasa Apso. She goes out to purchase wine to celebrate and takes her dog along. We learn she is the other driver and victim of Octavio's accident. Her dog is unscathed, but Valeria is critically injured and confined to a wheelchair. During filming, the dog was not actually in the car during the stunt crash.

Finally home, Valeria plays with the dog as it chases its ball into a hole in the flooring. For days, she and her lover try to rescue the dog to no avail. She looks into the hole and can hear the dog, but see only a rat or two scurrying into the darkness. In the final moments of the story, we learn that the dog's fate is far better than that of his mistress.

Throughout the first two stories, there is a reoccurring character that is not defined until the third story is told. The man, El Chivo, appears to be a street person who cruises the thoroughfares of Mexico City by day and makes his home in an abandoned building. His traveling companions are six dogs who are his friends and family. He shares what little he has with compassion and love toward his rag tag group of mutts who are all sizes and shapes and devoted to him.

El Chivo's story intertwines with the others at the scene of the fateful car accident. His rescue of Octavio's dog, Cofi, sets the stage for his tale of woe. In several scenes, Cofi appears injured and his wounds bandaged by El Chivo. The trainer explains in the video that the dog is a veteran of many television productions and trained to lie still, wear make-up and do a great many behaviors. The actor mentions in the video that he spent several weeks in pre-training with the dogs to develop the bond that El Chivo has for his dogs. However, El Chivo is not what he appears to be and his history reveals a complex man who has better relationships with his canine family than with his human family.

The BBFC has passed Amores Perros '18' uncut for an adult audience. The Board is satisfied with the evidence that no animals were harmed during the making of the film. Assurances were received from the film distributors and the principal animal trainer that the dog fighting scenes in the film were achieved through training and cinematic illusion and that no dogs were hurt. The Board's own detailed technical scrutiny of the fighting scenes supports that conclusion. Most significantly, the American Humane Association, which brings particular film expertise to these issues, has looked at the work critically. It has subsequently gone on record "appreciat[ing] the voluntary efforts of the Mexican trainers and handlers who have demonstrated a deep concern for the welfare of the animals in their care during production." It concludes that the dogs were unharmed.

The BBFC has spoken to the RSPCA and SSPCA who were concerned about some scenes where goading appears to take place. The Cinematograph Films (Animals) Act 1937 specifically refers to "cruel goading of an animal to fury", but the Board is satisfied that what is seen on the screen provides no actual evidence of such cruelty. The BBFC regards dog-fighting as an unacceptable sport and would not hesitate to take action against a film where dogs had been treated in this way.

It has during the past year cut 12 films and videos for scenes of actual cruelty to animals, ranging from horse falls to snakes being burned alive.