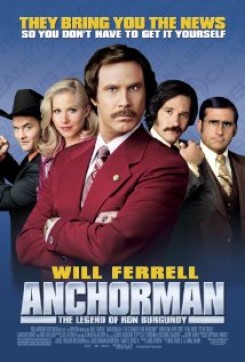 When ambitious newswoman Veronica Corningstone (Applegate) marches into the newsroom of top-rated anchorman Ron Burgundy (Ferrell), Ron is willing to play along at first. But when Veronica refuses to settle for being eye candy and steps behind the news desk, it's more than a battle between two perfectly coiffed newspersons...it's war.

Peanut played the role of "Baxter," Ron's faithful canine companion. This duo is often seen wearing matching PJs and headgear. Peanut wore only the pajama top for these scenes, along with specially designed headgear that slid over her head with elastic.

In one scene, as Baxter rides in the car with Ron, Ron carelessly throws a burrito from the window, hitting a passing motorcyclist. In retaliation, the irate biker punts Baxter over the bridge into water below. For this action, Peanut responded to her trainer's cues to jump from the car and walked to her mark on the ground next to the actors. The biker picked up the dog and carried her toward the railing, but actually kicked a stuffy (an artificial stand-in for the animal) off the bridge. Two trainers worked on this scene, and Peanut was well-prepped for the action.

For a scene where Baxter emerges from a river, Peanut was thoroughly prepped, and trainers ensured she could touch ground at all times. One trainer stood on each river bank; the first trainer placed the dog on mark on one bank, while the second trainer called to Peanut from the other side. The dog crossed the stretch of water and barked on cue once she reached her end mark.

In another scene, Veronica falls into an enclosure of hibernating Kodiak bears.

Due to the intricate nature of working with bears during hibernation season, when the animals are at their most indolent, filmmakers shot these scenes in several different takes and compiled them in post-production. For some of the basic shots, trainers stood off screen and worked with one or two bears at a time, placing them on mark and using verbal and hand cues to get them to lie down, put down their heads, open their mouths, stand, or step forward or backward.

To make it look like a bear hits one of the men, the trainer first positioned the animal about eight feet from the actor, then cued the bear to give a high five. This motion of striking out with one paw, coupled with the actor's response and the camera angle and lens used, made it seem like a genuine smack down.

For a shot where a bear battles a man, the trainer instructed the animal to "shake it!"–referring to a man-sized dummy used for the scene. Producers used a man wearing a bear costume for the shot of the bear maiming a reporter.

To accomplish the shot in which a man rides a bear, a stunt double actually rode the bear for a very brief time. Trainers prepped the stuntman and bear for this action, which was a simple cued movement of the animal from point A to B. The bear was rewarded with a buffet of salmon, chicken, treat balls, and cookies with grape jam.

In another scene, Baxter jumps into the enclosure and saves the day when he communicates with one of the bears looming large on its hind legs. Movie magic makes it appear as if Baxter jumps a great distance into the bear pen. In reality, Peanut leaped from the wall to a seven-foot platform topped with stunt pads. As a safety precaution, four stuntmen stood on both sides of the platform during the action. The shots of Baxter interacting with the bear were actually filmed separately and edited in post-production. Trainers prepped the dog extensively, and ultimately this entire exchange was accomplished using a person in a bear suit.

At one point in the movie, Veronica covers a feline fashion show where "models" don various costumes. For this scene, costumed trainers walked alongside each cat on the runway. The specially made, easily removable outfits were not restrictive or scratchy. Trainers rewarded the animals throughout their performance, and the feline fashionistas were on leash the entire time.

When rival news teams face off under a bridge, two men on horseback approach one reporter and ensnare him in a net. This equine action involved experienced stunt riders traveling at a slow lope for approximately 50 feet. The entire area was cleared of rocks and debris, and production crew members taped down all cables that the horses would have to cross. When the horses drag the netted man, the actor was replaced by a dummy.

"Nutty," the waterskiing squirrel was stock footage purchased by production.