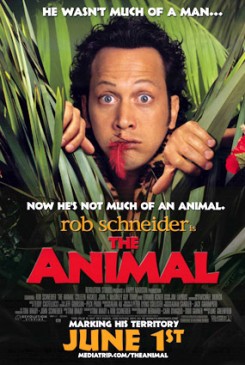 Animal is a comedy about Marvin (Rob Schneider), a police cadet who nearly dies in a car accident while driving through remote mountains. A strange beast rescues Marvin and brings him to a barn where surgery is performed and life-saving animal parts are transplanted into Marvin's body. When Marvin returns to civilization, he discovers that he is slowly developing more animal qualities than human ones.

A memorable scene in this film is the infomercial featuring a badger milking machine. The machine was custom built to fit the badger and included tubes attached from the machine to fake nipples giving the impression that the animal was really being milked. The trainer and the badger spent a long time becoming acquainted with the machine so that by the time the scene was filmed, the animal was comfortable with the prop. Pads were placed beneath the table as a precautionary measure and puppy pens surrounded the table so that the badger was safely contained. One trainer doubled as an actor in the scene, while four others positioned themselves around the table and out of frame. Food was used as a lure to guide the badger into the machine. The trainer doubled for the actor, held the leash and the badger pursued the food into the milking machine. At the end of the scene, the animal was rewarded with the food it so greedily followed. Four tubes filled with milk were attached to the under belly of a fake badger and the milking process began, while the real badger was off enjoying the edible reward.

He Brakes for Sea Lions:

Marvin is careening through the mountains when he sees a sea lion just sitting in the middle of the road. After the car swerves to avoid the animal and crashes off to the side, we find the sea lion still sitting in the middle of the road - perfectly fine. The sea lion arrived at the location in a comfortable trailer containing a private water tank and was accompanied by four trainers. During filming, a safety fence surrounded the road in case our friend decided to wander. The trainer put the sea lion on its' mark in front of a green screen and used hand signals to get the animal to look in different directions. The actual speeding car was added in post-production. After the scene was filmed, the trainer returned the animal to its' tank inside the trailer so it could cool off and relax!

Marvin is on the operating table hanging on to life while a montage of various animals (horse, goat, seal, cougar and chimp) peer over him. Some of the animals are wearing surgical caps. Each animal was filmed individually on separate days. The trainers dressed the animals and then placed them on their marks and used hand signals to get the animals to look in different directions. Later, during the editing process, each image was inserted into this scene.

Marvin eventually returns to the barn that was actually the laboratory where he was operated on in the beginning of the film. When he enters, there are several animals inside - a burro wearing a sombrero, a sea lion in a collar, a dog who jumps on a bed, a goat wearing a lab coat and a chimpanzee who does the moonwalk better than Michael Jackson! Each animal had its own set of trainers who were nearby to assist at all times. The perimeter of the set was secured with a fence and animals were placed in different areas of the room. The moonwalking chimp was filmed separately. All of the dance moves were done in front of a green screen and special effects were added in post-production to make it look like this primate had rhythm.

Marvin visits an animal shelter and is shown chewing worms and feeding them to a baby turkey vulture that is comfortably cradled in a box. We see birds flying around the shelter, a close up of a snake about to strike, terrariums with snakes and lizards, birds perched in the background and a capuchin monkey in a cage who appears to be upset. The worms that Marvin feeds the baby vulture were dead worms purchased by production from a bait store. The worms that he chews were rubber. Birds were released to fly from point A to B. These flight and retrieval sequences were controlled by experienced trainers. Trainers placed all of the animals that appear in the background cages. The cobra that strikes was animatronic. The capuchin was filmed separately and although it appears the monkey is upset by all the commotion that is going on in the shelter, it was really reacting to its' trainers hand signals and excitedly awaiting a treat!

Marvin is introduced to the shelter's rescued orangutan. The orangutan is played by Louie who exchanges raspberries with Marvin. Louie starts slapping at Marvin which provokes a wrestling match. The scene was filmed in cuts using the live orangutan, an actor in an oragutan costume, a fake stuffie and a prosthetic breastplate. In the end they end up smiling arm in arm.

While two men discuss the fact that she is in heat, a goat stands tied to a post in a yard. Marvin approaches the goat. Marvin's animal instincts are raging at this point and he begins to pet, kiss and caress the goat. He then walks behind the goat and we see a close up of the goat's rear as Marvin gives it a love tap. He unbuttons his shirt and appears to be ready to passionately take the goat. The goat kicks Marvin with its' back legs and he flies across the yard. The actor was introduced to the goat so they were familiar with each other before filming. The trainer/chaperone placed the goat on a mark in the yard and secured a lead rope to a stationary post. Food was scattered in the grass so the goat would be occupied and happy. The goat didn't even react to the actor's antics behind him. When filmed from the rear, the goat wore a fake tail that was longer than the goat's real tail and was able to keep the goat from showing off too much! The trainer and the actor worked together for a long time to perfect the flirtatious tap on the goat's behind. The kick was choreographed so that the trainer would cue the goat to kick as the actor fell backwards in response.

At the end of the film, as the couple kiss on the couch, we again see the goat walking past the sofa. One trainer released the goat to another trainer who stood on the other side of the set and called to the goat.

A cute Tabby cat sits on the porch of a house and growls at Marvin as he passes. Marvin chases the cat as it runs into some bushes in the yard. When the cat comes out of the bushes it has clumps of fur missing. Five cats were on call for this part but only one was used on camera. Two trainers accompanied the chosen cat onto the set. One trainer released the cat that then ran to the bushes where another trainer was waiting with a treat. After this portion of the scene was filmed, a professional groomer was summoned to shear one side of the cat's fur. The cat did not seem to mind at all and cat fur grows back. The cat was then placed on a mark back in the bushes and called out by a treat weilding trainer.

Dimples is a dog that lives next door to Marvin and prefers to urinate on Marvin's yard. We watch as the dog runs over to Marvin's porch, urinates, then runs back into his doghouse. One trainer attached a catheter to Dimple's back leg, placed the dog on its' mark and cued the dog to run to the house. When the dog stopped on its' mark near the porch, a prop man pumped water from a holding container out through the catheter fastened to the dog. Water streamed out of the catheter and ran down Dimple's leg and into a puddle beneath him. The trainer used hand signals to get Dimples to run back into his doghouse.

Later, a growling Dimples runs to Marvin and grabs him by the shirt. The trainer placed the dog on its' mark and then verbally cued the dog to run up a small ramp and jump towards the actor, who falls to the ground. The trainer used hand signals to get the dog to grab the actor's shirt and growl. The dog viewed the scene as playing with the actor rather than attacking him!

Marvin at the Dog Park:

Marvin finds himself in a park surrounded by people playing with their dogs. Balls and a frisbee are thrown for the dogs by their owners, but Marvin can't resist the fun and joins in by jumping up and catching them in his mouth. For this scene, a specially built platform was covered with non-slip carpet padding. The trainer used hand signals to get the dogs to run up the platform and leap into the air after the ball or frisbee. The dogs were rewarded with the toy after the scene was filmed - the actor received a paycheck. Learning from his canine companions, the actor also used a platform to get a running start and a big leap in the air to dramatically catch the toys in his mouth. When trying to catch the frisbee, the actor and dog leaped into the air at the same time. The dog was naturally very good at catching the frisbee in its' mouth, the actor however, needed more training!

Although the chimp does the moonwalk earlier in the film, there are two more scenes in which the capuchin appears. One is a brief scene where the chimp is wearing a dress and it stares at Marvin then turns and walks away. The trainer dressed the chimp and put it on it's mark, then stood off camera and used visual cues to get the chimp to walk off camera. Another brief, but memorable scene, is when the chimp gives Marvin the finger. Believe it or not, the trainer used a hand signal and the chimp was proud and quick to display its' middle finger. Wonder if he knew what it meant?

In a black and white dream sequence, a herd of cattle are grazing. A fence was put around the set and eight trainers and two veterinarians stood just off camera. One large, black steer, two cows and 13 head of cattle were used. As the animals grazed in the field, the camera captured the moment.

The large fish that Marvin picks up with his mouth from an aquarium was a fake fish prop. The fake squirrel skin vest that Marvin wears also came from the prop department. Two different scenes showed animals on television and were stock footage from real television shows. The aquarium that is seen attached to the wall in Marvin's apartment was supplied by a pet store. After the film, the aquarium was returned to the store with all of the inhabitants doing swimmingly.