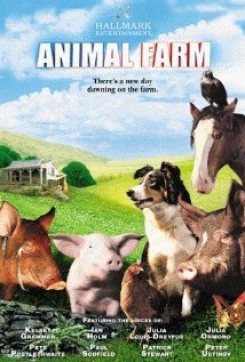 What if animals ruled the world?

Animal Farm is George Orwell's classic satire on political totalitarianism and animal rights told as an animal fable. When Major, the prize boar of the Manor Farm, is on his deathbed he envisions a time when animals will no longer be oppressed by the "true enemy - man." After his death the animals rebel against Mr. Jones, the owner of Manor Farms. They rename the farm "Animal Farm" and call old Major's theory "Animalism." Presented as the most clever animals, the pigs assume leadership and the running of the farm. They draft the Seven Commandments of Animalism and write them on the barn wall.

The Seven Commandments are:

1) Whatever goes on two legs is the enemy.

2) Whatever goes upon four legs, or has wings, is a friend.

3) No animal shall wear clothes.

4) No animal shall sleep in a bed.

5) No animal shall drink alcohol.

6) No animal shall kill any other animal.

7) All animals are equal.

Soon a rivalry ensues between the two top boars, Snowball and Napoleon. Napoleon wins out only to create an atmosphere of oppression for the majority of brutally treated work animals. Although prosperity comes to the farm, it is only the pigs that benefit.

The Commandments are slowly rewritten one by one until the last one reads: "All animals are equal, but some animals are more equal than others."

The pigs have become more human day by day. By the end of the story, the pigs are walking upright on their hind legs, drinking alcohol, and carrying whips. Napoleon entertains his human neighbors and it is impossible to tell the pigs from the men.

Animal Farm was filmed in Ireland and monitored by the Irish S.P.C.A. AHA traveled to Ireland to investigate reports of pre-production cruelty and found all of the live animals were happy, in good condition and responded to humane cues from trainers. Almost every live animal had an animatronic double designed by the Jim Henson Creature Shop. After filming began the Irish S.P.C.A. provided on set supervision.