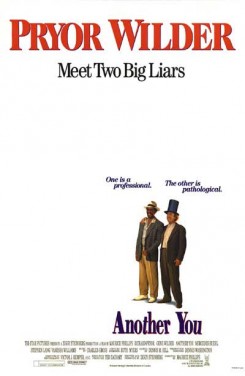 Eddie Dash, a con-man, is on probation and has to do some community service. He is given the task of taking George, a former Volvo salesman, out of the sanitarium where he has resided for the past 3 1/2 years, and Eddie must re-introduce George back into the real world. George had been committed for pathological lying and now believes he is cured. Eddie takes George to the Wax Museum where George is mistaken for Abe Fielding, a very wealthy brewery owner. Eddie convinces George to play the part of Abe in order for them both to become rich. The story takes us through some hilarious adventures as George lives yet another lie by being Abe.

In one scene as George arrives at his new home, really belonging to Abe, George discovers that along with the home comes his Doberman. The dog growls at George and follows him to the bedroom, where he enters, closing the dog outside of the door. In another scene, as Eddie approaches the house, the Doberman bears his teeth and growls at Eddie, Eddie then gives the dog a candy bar. The dog was given hand and voice commands with food rewards for these scenes. The candy bar was really a doggie treat.

While Eddie and George are duck hunting, they come across a large brown bear who stands up on it's hind legs and makes waving justures. The bear was responding to his trainer who was out of camera view giving the bear hand and voice commands. We also see ducks flying overhead as background.

In a scene where Eddie is driving over to George's "new" home, he screeches around a corner running into some trash cans. As he does, a cat flies out of the trash can into the air and falls to the ground. A real cat was used for the close-ups and a fake cat was then used when the cat is flying through the air and falling to the ground. The real cat was never filmed with the car action.

At one point there is a scene in a hunting lodge with several taxidermied animals mounted on the walls. These animals were all supplied from the prop department.